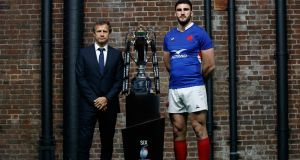 However, hope springs eternal once again and Fabien Galthié is the latest man tasked with the challenge of solving world rugby’s most infuriating puzzle. The former French scrumhalf and captain takes over from the beleaguered Jacques Brunel, whose side came a Sébastien Vahaamahina elbow away from pipping Wales into the World Cup semi-finals. With the 2023 tournament being held in France Galthié’s remit is clear - build a team capable of lifting the Webb Ellis Cup on home soil. And his first squad is clearly a nod to the future - Bernard Le Roux is the only member aged 30 or above in a 42-man party which includes 19 uncapped players. Perhaps the most intriguing French subplot is the recruitment of Shaun Edwards - if he can bring order to an often comical defence then they will be a force to be reckoned with.

The Galthié era was given a soft launch, as the incoming coach joined the French set-up as an assistant to Brunel last summer following another dismal Six Nations campaign. While Brunel - who took the job after the messy end to the short-lived Guy Noves era - was nominally still in charge of France at the Rugby World Cup, it’s hard to imagine Galthié wasn’t already laying the groundwork before he officially took the role in November. With Galthié and strength and conditioning coach Thibault Giroud involved Les Bleus went on to win five of their seven matches in the build-up to Japan and during the tournament, while they were robbed of a chance to take on England due to Storm Hagibis.

However, the last World Cup was accepted as a write-off and Galthié will be judged on what happens from now on - starting with a mouth-watering opener against England in Paris. Galthié has packed his first squad with youth - something which will buy him a bit more time - and along with his new coaching team of William Servat (forwards), Laurent Labit (attack), Edwards (defence), Karim Ghezal (lineout), and Raphael Ibanez (team manager), will be hoping to mould a team which can make France serious challengers again.

Having made his international debut in 2014, Charles Ollivon’s France career failed to really ignite and he still has just 11 caps to his name. The 26-year-old featured against Ireland in Dublin in February 2017 - his only championship appearance to date - but his progress was dogged by a series of shoulder injuries. However, an operation in September 2018 proved a success and he was back in a blue jersey for the Rugby World cup warm-up clash against Scotland in Nice last August. Since then he hasn’t looked back, and he was one of France’s standout performers in Japan, starting the three crunch fixtures against Argentina, Tonga and Wales. His comeback has now been crowned by being made captain of an inexperienced but exciting Les Bleus squad, and his appointment is a major statement of faith by new coach Galthié. The Toulon backrow will have to learn quickly and learn on the job, but he clearly has the mentality and ability to lead France into a brave new world.

In a squad with 19 uncapped players and an average age of 24 it perhaps seems strange to choose the most-capped player as the man to keep an eye on, however Gael Fickou could really thrive in Galthié’s new set-up. With 51 France appearances Fickou is the elder-statesmen in Galthié’s 42-man party, however he is still only 25-years-old and surely approaching his prime. Fickou is a pleasure to watch with the ball in hand, a graceful, electric runner with a magical step. Along with Virimi Vakatawa he can provide a strong midfield core to an inexperienced backline with youthful halfbacks, while he can marshal a defence which can only improve under the tutelage and tough love of Edwards. Fickou has been one of the shining lights in a difficult decade for French rugby - he deserves his chance to flourish in a team which are challenging for titles.

France led Wales 16-0 at half-time in the opening match but imploded and conspired to throw the game away, losing 24-19 to the eventual Grand Slam champions. They were embarrassed at Twickenham - 44-8 to England - and their only wins came at home to Scotland and away to Italy.

France will be champing at the bit to give England a rattle in their opening fixture in Paris, and they probably have a statement result in them. However, the high turnover throughout the French set-up makes a title challenge unlikely. Fourth.