Six Nations 2020: Scotland desperately need something to shout about

Scotland captain Stuart Hogg says that is excited to play with a group of young players that have stepped into the squad following the retirement of several experienced internationals such as Greig Laidlaw and John Barclay. Video: Six Nations 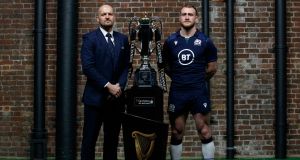 To say things didn’t go to plan for Scotland at the World Cup would be an understatement. Their opening fixture against Ireland was framed as a battle for supremacy in Pool A, and they were blitzed 27-3. More frustration followed as Storm Hagibis threatened to see their must-win clash against hosts Japan called-off, causing consternation among Scottish ranks. The game did go ahead but Scotland were blown away in a different fashion, the dashing Brave Blossoms sending them packing with a 28-21 victory. For Gregor Townsend’s side their tournament was over before it ever really began, and their premature departure raised questions over how much the side are progressing under his stewardship.

The 2020 Six Nations will be Townsend’s third in charge of Scotland, but while there is continuity at the top this feels like the start of something new. Stalwarts Greig Laidlaw, John Barclay and Tommy Seymour have all retired from international rugby, and Townsend’s 38-man squad contains six uncapped players. Scottish preparations were thrown into disarray after Finn Russell was suspended after he missed training following a late-night drinking session. He will miss the opening clash with Ireland, although Townsend hasn’t shut the door completely on the Racing 92 star going forward. Russell’s absence and an injury to Darcy Graham increases the burden on Stuart Hogg in the backline, while they can often be physically outgunned upfront. The defence also needs to tighten up - only Italy conceded more tries in last year’s tournament. This is the year for them to kick on under former Glasgow boss Townsend, but it won’t be easy.

Townsed replaced Vern Cotter as Scotland boss in May 2017 and a rollercoaster ride has endured. There have been some fine moments during his time in charge - a 25-13 Six Nations win over England in 2018, last year’s 38-38 draw at Twickenham, thrashing Australia 53-24 at Murrayfield in 2017 after beating the Wallabies Down Under a few months earlier. But there hasn’t been the consistency needed to turn Scotland from a dangerous outfit into serious challengers - since Townsend took over they have played 31 Test matches and won 17 of them.

Last year’s World Cup flop highlighted that inconsistency and the huge work which still needs to be done. Some of the old guard have called it a day and Townsend now has a youthful squad to shape going forward. He is also working with a new backroom staff - former Ospreys boss Steve Tandy joins from the Waratahs to try and shore up an often porous defence, while former France prop Pieter de Villiers has been appointed scrum coach on a short-term contract. Townsend is nearly three years into his tenure, but this feels like a fresh start. The 46-year-old is likely to be given plenty more time to build, providing there are still some famous results along the way.

Sometimes the key to choosing your captain is straightforward - pick your best player. And that is what Townsend has done in handing the role to fullback Stuart Hogg, Scotland’s talisman and most dangerous weapon. 27-year-old Hogg is also now his side’s most experienced player. He has 72 caps to his name after making his debut against Wales in 2014 - the only time he’s appeared off the bench for his country. Hogg takes the reins from the outgoing Laidlaw and hooker Stuart McInally, and he has insisted the responsibility won’t affect the way he plays. Scotland will be hoping he stays true to that - Hogg’s swashbuckling style, his ability to split defences with his menacing runs from deep - make him one of the best 15s and best players on the planet. There will also be pressure on the likes of McInally and Finn Russell to guide an inexperienced team, but Hogg will be the man to lead by example from the backfield.

What Scotland lack in physicality they can try to make up for in work-rate, intensity and endeavour - something emphasised by the blossoming backrow Jamie Ritchie. At six foot four and 105kgs, openside Ritchie is lithe in appearance but is a tackling machine - he made 66 in four Six Nations appearances last year. The 23-year-old is a menace on the floor and a rangy, pacey presence around the park. He also provides a valuable option at the lineout and restart. This Scotland side are sorely lacking bruisers up front, particularly in the backrow, but Ritchie has the ability to make the dark blue number seven jersey his own and add plenty of caps to the 14 he’s earned since his debut in 2018.

An opening weekend victory over Italy was all Scotland had to show for their efforts until the Championship’s final weekend. They nearly pulled off an outrageous coup at Twickenham but had to settle for a 38-38 draw after George Ford’s last-minute try.

Trips to play Ireland and Wales will be tough, with England and France visiting Murrayfield. The latter looks like Scotland’s best chance of a major scalp this year. Fifth.