James Ryan and next generation must wait to exorcise demons

Gavin Cummiskey at the Tokyo Stadium 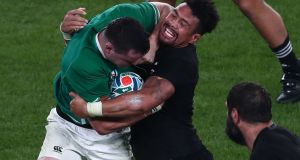 The ghosts of World Cups past are floating about the Ajinomoto stadium. Those who remember are forgiven for feeling like they have been transported back to Melbourne in 2003.

The vibe – a descent into hopelessness – was the same until Ryan walked into the mixed zone with no socks and a maturity way beyond his 23 years. He came when others would not. No senior players walked the line.

It feels awfully like the quarter-final exit from 16 years ago rather than the 2011 defeat to Wales. Wellington, and those regrets will never fade but at least New Zealand’s man handling of the Irish pack was, like France in ’03, a clean kill.

Maybe wiser owls can tell Ringrose, Jacob Stockdale, Tadhg Furlong and Ryan how it’s all going pan out. Come France 2023, or failing that 2027, there will be fresh opportunity to end this interminable cycle of World Cup failure but only if Ireland avoid the next wave of superhuman New Zealanders.

James Ryan disagrees because James Ryan sees a future that older minds cannot even contemplate. Because he has to.

“Joe has taken Irish rugby to new levels,” said the leader of every team he has played on up until becoming a valued lieutenant under Best at this World Cup. “Joe has set standards that are different now than before he took over.”

Ryan is speaking from a position of strength having led the Ireland under-20s to a World Cup final and after winning everything on offer in European rugby at club and Test level.

O’Driscoll and O’Connell had no medals in 2003.

But, right now, Ryan and Ringrose remain stuck in the same mud as their predecessors. And the subsequent glut of silverware could not get them past Wales in windy Wellington.

All these World Cup days get clumped together now as a large majority of the public will understandably lose faith. They will believe that a semi-final is beyond the reach of male Irish rugby players.

Not Ryan, and that provides some comfort after this ruthless dismantling.

“I think [Irish rugby] can get to that level. We have had some brilliant wins, this group, and I know last year has been tough because there has been some losses. The results aren’t being produced at the moment.

There has never been enough Ryans or O’Connells. That’s been the problem. Maybe that is about to change. Maybe the coming generation will be good enough.

“I hope so,” Ryan replied. “We hadn’t beaten New Zealand. We’ve done that. Or won a Grand Slam in a long time. We did that.

“The next stage is winning a knock-out game at a World Cup. There is no reason we cannot when looking at the group and some young guys who are there.

“I have full faith we will push on.”

Maybe Schmidt will come back to haunt Ryan’s Ireland.

Faith in another epic victory remained unshakable despite New Zealand racing into a 10-0 lead. The early All Black scores were unable to silence a raucous Irish crowd. Belief had surged around the bowl when The Fields of Athenry reverberated off Kapa O Pango.

That moment, an electric meeting of cultures, a war dance met so valiantly by song, will be remembered by the Irish supporters long after they bury what came after.

A shiny new Schmidt strike play was revealed in the opening seconds, right off the first scrum. The magic was tangible as Conor Murray picked early and fed Jacob Stockdale on the short side, and the Ulster left wing instantly ran the opposite direction before passing to Sexton.

The All Blacks were temporarily exposed as space became visible up along the right tramline. A large patch of grass for Keith Earls to race into. Sexton – the accuracy of his right boot was always going to decide how close Ireland would get to New Zealand – undercooked the crossfield punt.

The promise of a pre-designed early score disintegrated before our eyes.

“The game itself, I think you have to put your hand up and say they were the better team definitely,” said Ryan. “At the same time, we created a lot of space at times with some of our plays and we were one pass away from a score. It went the other way, they got an intercept or a loose ball.”

There would be one more chance. Two chances is the height of All Black generosity – in any era – in a knockout game.

Robbie Henshaw was the first of many Irish knock-ons in contact when smashed by a gang of Kiwis.

The All Blacks sprung to life. Richie Mo’unga began his utter dominance of the outhalf duel with a lovely grubber that Rob Kearney barely managed to cover ahead of the rapid George Bridge.

Huge pressure now. With 11 minutes played New Zealand had the lineout 15 metres from the Ireland try line. Kieran Read was first to rupture the row of green defenders. Ardie Savea’s clear out, to secure silver service and a gap for Aaron Smith to snipe over for the first try, was worth its weight in black gold.

Ireland’s defensive pillar had crumbled. They could not cope.

“The speed of the game was very quick,” Ryan admitted. “They attack both sides of the ruck. They are so good at that it creates moving parts in our defence and that makes it more difficult to win collisions because they have so many options.”

And still, the swaths of green around the ground crackled with anticipation – 10-0 was still a sporting contest. So many Irish who were present in 2013 for the near miss against Richie McCaw’s invincibles had shown up. Thousands of these supporters travelled to Chicago to witness history in 2016. They all remembered Dublin last November in what remains Schmidt's untouchable achievement in a decade of breaking new ground.

But this night was the end. And the end of most reigns tend to be draped in failure.

“They need to cut out the errors but I don’t think it will be enough,” O’Connell told the UK public at half-time. “These guys have gone to a different level. That was incredible.”

The ghosts of World Cups were all around the stadium. The captains before Best – O’Driscoll, O’Connell and Jamie Heaslip – came to talk about Ireland’s inevitable demise.

The wonder is if all of them were on the field and in their prime would it have made any difference against the 2019 All Blacks.

The end came in the cruellest fashion imaginable; a costly Sexton error. There followed three minutes nobody could have imagined when daring to dream in the early hours of this past week.

Perhaps Schmidt knew such a beating was due. He warned anyone as much last Thursday. Schmidt knows that deception – of which he is the master – would not be enough on its own. He knew that Sexton needed a flawless game. He knew the Ireland lineout could not, must not, creak.

The killer moments came early. That Sexton was at fault makes for the bitterest pill to swallow.

On 16 minutes Nigel Owens called for an Ireland penalty after Ryan was tackled “without the ball”. Sexton kicked the ball down the line as Best and Iain Henderson readied the throw, catch and lineout maul that would turn this quarter-final into a proper contest.

Instead, Mo’unga acrobatically intervened to keep the ball on the pitch. The missed touch proved a monumental mistake against a team that are, yet again, changing the fabric of the sport they have largely dominated since 1905.

The 60-metre swing was not a total disaster but when the Best to Ryan lineout got disrupted, and Furlong fumbled possession, a New Zealand scrum platform dazzled this World Cup in the same manner they cut open the Springboks a month ago. Reece was balletic in an arching run on to Jack Goodhue’s perfect offload to send Bridge thundering down the wing. Aaron Smith picked up the pieces to claim his second try.

Thereafter it became an event. Another hard luck party for Irish people who have ploughed thousands of Euros into the third biggest economy on the planet.

Schmidt’s legacy is secure – of course it is – but this World Cup gets filed away with all the others and not because of Sexton’s costly error or Furlong’s fumble. No. This World Cup failed because of Shizuoka, and the night Ireland ran out of energy when they were expected to shine.

That remains a familiar lament.

When Henshaw defiantly skidded over for a late try it felt very like O’Driscoll’s late tries against the French in ’03. Except not as impressive. Not as defiant.

Beating the world champions always felt like a shot in the dark. An All Black darkness that remains as inevitable as the setting sun.

Ireland, deservedly, go home. The parting gift was one last, version of The Fields. This time it rang hollow.

At least Ryan doesn’t believe history will repeat itself. That matters.