Disappointing Nations Cup set for a finale of ‘farce’ 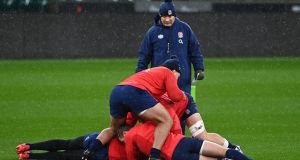 Eddie Jones takes an England training session at Twickenham ahead of the Nations Cup match against France. Photo: Andy Rain/POOL/AFP via Getty Images

At face value the organisers appear to have the final playoff weekend to the Autumn Nations Cup that they would have craved, or the final anyway. Except that, as the French team manager Raphael Ibanez readily concedes, their showdown with England at Twickenham tomorrow (kick-off 2pm) is liable to be a “farce”.

One wonders how the Top 14 club owners and Ligue Nationale de Rugby bigwigs will feel as they watch a callow French team being thrown to the wolves. This is the consequence of them threatening legal action until striking a deal with the French Federation which limited Fabien Galthie to a maximum of three games per player in a six-game autumnal programme.

As Galthie and his coaching staff opted to frontload their use of front-liners, so to speak, in a bid to secure the Six Nations title and maintain continuity at the start of their schedule, none of the starting XV which began the 2020 Six Nations with a 24-17 win over England in Paris back in February will line out tomorrow.

Instead, their starting XV have only 68 caps to their name, whereas the most experienced England team of all time has 813. Their 23-year-old scrum-half Baptiste Couilloud, whose previous three caps were off the bench, is one of four players making their first start and one of 11 in the starting lineup aged 24 or under.

Georgia and Fiji, making their competition debut after three cancellations, begin proceedings in Murrayfield at midday before there is a repeat of the opening weekend of the 2020 Six Nations, when ironically the outcomes ultimately decided first, third and fifth places.

Wales host Italy for the latter gong when seeking their 15th win in-a-row over the Azzurri at Parc Y Scarlets (kick-off 4.45pm). Those three games are all on Premier Sport in Ireland while the best game of the weekend could well be the meeting of Ireland and Scotland at the Aviva Stadium today (kick-off 2.15pm, RTÉ 2).

The tournament could certainly do with an entertaining encounter, just the one for heaven’s sake, although the weather forecast is not flash. The law changes have empowered defences and this has led to a surfeit of kicking. That said, it should be noted that Ireland scored more tries (17) in the 2020 Six Nations than in the 2019 version (14) even though there were 10 tries less overall. Tellingly, England scored 24 tries when finishing second last year and 14 when reclaiming the title this year.

Coming to the end of his first year as Ireland’s attack coach, Mike Catt, admitted yesterday: “Listen you’ve got very mobile athletes out there now. The big guys can move. There aren’t that many spaces or holes anymore so the physicality at international level is huge. That’s just what it is. The beast is the physical side of it. But it’s about being smart. The teams that have won the major championships have been smart.

“England, New Zealand and France are kicking a lot of ball. Defences have definitely got a hell of a lot stronger and it is obviously harder to attack. We have kick, pass and run options, and we need to get a balance between all three of those things.”

This is more of a quantum leap for Ireland, whose successes under Joe Schmidt were founded on a possession-based game through their excellence at the breakdown. In this Autumn Nations Cup so far Ireland have kicked possession (8.1 per cent) out of hand the least of the Six Nations’ teams, just below Wales (9.9 per cent). The revitalised French, for all their ability to conjure tries out of nothing, have kicked the most (16.3 per cent), with England next (14 per cent), and Scotland third on 12 per cent. By contrast, only Wales (52.2 per cent) have passed more than Ireland (50.8 per cent).

“Attack is not just with the ball in hand,” said Catt. “I think our kicking game, attacking in our green zone, the opposition 22, we’ve had a broad area around where we need to go. I always say rugby union is about decision-making, whether it’s in attack or in defence or it’s our kicking game, whatever it is, and I think we’ve progressed really, really well in certain areas.

“There are still certain areas where we need to go to probably another two or three levels. Our execution last week wasn’t acceptable,” Catt admitted.

“But when you try to do that all-court game it takes time unfortunately. I think as a group of coaches we believe where we’re going is the right way. We believe in the way Andy wants the game to be played and the players have definitely jumped on board. But it does take time.”

4 Solskjaer angry at referees, other managers and Chelsea website

Specimen salmon caught on river Drowes for first time in 36 years 00:00
Liverpool break Ramsdale’s resistance at Bramall Lane 21:34
Solskjaer angry at referees, other managers and Chelsea website 21:24
Leinster punish Glasgow’s ill discipline with bonus point win 20:33
TV View: No need to feel sorry for England, but if it was any other team 20:15
Crossword Get access to over 6,000 interactive crosswords