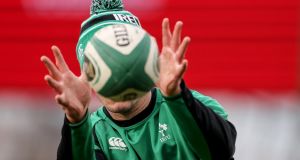 This one has assumed more importance than might have been envisaged. For all the talk of progress being made and the positive vibes within the camp, nothing generates happiness within a team quite like winning.

Disconcertingly, the cards have fallen a little awkwardly in some respects for Andy Farrell. As fate would have it, they end his first year in charge with a game against the same opponents at the Aviva Stadium, and a first defeat at home to Scotland in a decade would not only reverse their final standings in the Six Nations but would rather question the belief that progress is being made.

Against that, a win would merely cement their ranking of third in the Six Nations pecking order and probably won’t be enough to satisfy the critics either.

Furthermore, Ireland have been handed a six-day turnaround and although refreshed by the return of four players to the starting line-up who weren’t involved last week, by contrast the cancellation of Scotland’s game against Fiji has given Gregor Townsend’s team a two-week run-in to this encounter. That could possibly tell in the last quarter.

They’ll believe they left a win behind last February, when Stuart Hogg dropped the ball over the line and spent the endgame encamped in the Irish 22. They’ll be hugely motivated and, despite France ending a six-game winning run last time out, as bullish as ever.

Sadly, but in accordance with modern trends, they’ve also cut their cloth this year, placing more of an emphasis on strong set-pieces, defence and their kicking game and less on the high-tempo, higher-risk game which made the most of Finn Russell’s missing talents. That said, one of their South African quartet, Duhan Van Der Merwe, has added to their physical potency on the wings and in between him and Darcy Graham there’s no doubting the threat Hogg poses with his paces and footwork.

Scotland have become a tougher nut to crack since Steve Tandy became their defence coach, although recalling how much trouble England caused at the breakdown in Twickenham against this same Irish backrow, and same pack bar Rob Herring at hooker, the Irish camp probably aren’t too disappointed that Hamish Watson is not playing.

True, Scotland have a debutant at 10, their fifth outhalf of this Autumn Nations Cup, but Jaco Van Der Walt is a very polished player with an impressive kicking and passing game, whose temperament suggests he won’t be remotely fazed.

Winter having arrived, the forecast is for a dirty day in Dublin, which won’t bother the Scots and in turn is liable to accentuate the importance of the set-pieces. Scotland bring not only a strong scrum but an experienced trio of frontrow replacements against the still Tadhg Furlong-less Irish scrum.

Cian Healy and Andrew Porter have had a big workload since the resumption, and backing up the former will be the prospective debutant Eric O’Sullivan. Helpfully, he’s been playing well for Ulster and has experience of coming up against both Zander Fagerson and the Scottish replacement tighthead, WP Nel, who can be a tricky customer.

With Iain Henderson calling and his Ulster team-mate Herring throwing, Ireland had a perfect return from 16 throws last week, although Georgia hardly possess a defensive line-out. Given Jonny Gray is in the mix, Scotland will pose an altogether more difficult proposition, albeit this is where the presence of Peter O’Mahony helps, while being relieved of both the captaincy and calling the line-out may benefit James Ryan, not that he hasn’t been playing to his usual high standard.

The main reason for Irish optimism is that Johnny Sexton is back after missing the last two games and is reunited with Conor Murray at half-back from the start for the first time in this competition. Sexton will also ensure the performance won’t lack for energy while sharpening Ireland’s attack by bringing those outside him into the game as he does. He has been in good form this season and with their reassuring presence and experience, Ireland should be well directed around the pitch.

Physically, Ireland should at the very least draw parity and one can see where they are coming from when repeatedly suggesting that the missing ingredient is a little more of a clinical edge in the opposition 22. So far in this tournament, they have converted 16.1 per cent of their visits into the opposition 22, the sixth lowest return in this tournament to date (whereas Scotland are second highest with 33.3 per cent).

There’s plenty to motivate this experienced Irish team, as well as providing them plenty of belief. They have won 11 of their last dozen matches at home to Scotland, the sole loss coming at Croke Park in 2010 when leaving a Triple Crown behind them, and haven’t lost to Scotland at this venue since 1998, when Townsend was playing. For all the negativity surrounding them, Ireland have also won 20 of their last 21 home matches, including their last eight in a row.

It could well be tighter than the bookies’ 10-point handicap suggests but this Irish team must be stung by the outside negativity and have it in them to respond with a winning performance.