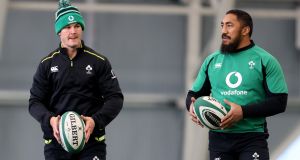 Johnny Sexton and Bundee Aki are among the frontline Ireland players set to return to starting XV for Saturday’s Autumn Nations Cup playoff against Scotland at the Aviva stadium. Photograph: Dan Sheridan/Inpho

Last Sunday’s game against Georgia afforded Andy Farrell and the Irish coaching staff the opportunity to delve deeply into their squad, thus bringing to 34 the number of players used in the three Autumn Nations Cup games to date. But the side announced on Thursday afternoon for Saturday’s third-place playoff against Scotland at the Aviva Stadium (kick-off 2.15pm) will reflect their desire for Ireland to put their best foot forward.

The defeat in Twickenham and the second-half display against the Georgians – “not good enough” admitted Farrell – obliges the head coach to select what he believes is Ireland’s best side to win this game. Accordingly, the starting XV is likely to see the return of Robbie Henshaw, Bundee Aki, Johnny Sexton, Cian Healy, Rónan Kelleher and Caelan Doris.

As James Lowe has been ruled out, the back three is liable to remain unchanged. Giving Jacob Stockdale a run at fullback for both Ulster and Ireland was evidently a plan hatched during the hiatus and after further glimpses of his passing skills last week in just his second Test start there last Sunday, the Irish coaches are liable to continue with the experiment for the culmination of this window at any rate.

It would be no surprise to see the wings, Hugo Keenan and Keith Earls, remain in situ. Keenan has hardly put a foot wrong since taking to Test rugby as seamlessly as he did to being a first choice with Leinster since the resumption – coming up with big pays while covering huge amounts of ground in the backfield – and is now in line to start all six Irish Tests since the resumption, a la James Ryan.

While Sexton and Henshaw have both returned to fitness this week and look sure to return, admittedly Chris Farrell has completed 80 minutes in all three games to date and is putting his name forward in midfield. But Aki, heretofore restricted to 80 minutes against England, would provide a fresher dimension as well as a proven partnership with Henshaw.

Jamison Gibson-Park also looks sure to return to the matchday 23 and possibly even to start again, as he did against Wales and England, if the dead leg Conor Murray suffered against Georgia has restricted him in training this week. But otherwise Murray has responded well to being named twice on the bench, both in the second half at Twickenham and in the first half against Georgia.

One always felt Kelleher was rested to a degree last week and he has not been held responsible for the mistimed lineout which led to Jonny May’s breakaway try the week before. Although Rob Herring had a perfect return last weekend from 16 throws, the vast majority were unchallenged, and the likelihood is that Kelleher will pack down between Leinster team-mates Cian Healy and Andrew Porter.

For all the vast potential of the Ryan-Iain Henderson secondrow combination, it remains somewhat unfulfilled for one reason or another. The latter’s suspension and medical issue meant last Sunday’s game was only their third start together since the World Cup, and only the 15th time in total. But it remains the go-to frontline pairing.

With Doris’s ball carrying, distribution and strength on both sides of the ball cementing his place in the backrow, one presumes the six-day turnaround is likely to count against Will Connors given the concussion he suffered against Georgia.

This, perhaps, averts a difficult decision for Farrell and co, for it means both CJ Stander’s high volume of work and Peter O’Mahony’s lineout athleticism, leadership and skill set can be accommodated among the loose forwards, with the latter at ‘7’. This was the combination which the Irish coaches went with at Twickenham and might have been of a mind to revisit anyway.

With Ed Byrne sidelined, Finlay Bealham may well cover loosehead as he did at Twickenham, all the more so after staring there against Georgia, with John Ryan covering the tighthead side. Quinn Roux and Tadhg Beirne have both, it appears, enhanced their credentials in the eyes of the coaches in this window and could cover the secondrow and backrow.

As Billy Burns has also been sidelined, Ross Byrne will resume his familiar role of covering for Sexton off the bench while any one of Chris Farrell, Andrew Conway or Shane Daly could be asked to wear the number ‘23’.