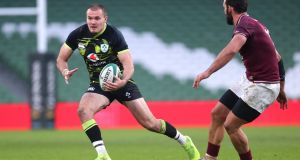 One of the reasons that Ireland remain so Johnny Sexton-dependent is that he has invariably been Ireland’s sole playmaker. Opposing teams can focus on the Irish outhalf because so much of Ireland’s kicking and creative game goes through him.

Garry Ringrose has been missed in this window in potentially offering more variation and width to the Irish attack. A second playmaker complicates things for an opposing defence, and especially if he has a roving role from fullback. It’s why Beauden Barrett was switched to fullback by the All Blacks so as to accommodate Richie Mo’unga.

Allowing for the passivity of the Georgian defence in the first half, and the bluntness of the second period, there were signs of Jacob Stockdale filling this role last Sunday. Hitting the middle of the attacking line, there was that left-to-right skip pass for Hugo Keenan’s try and the right-to-left version of same for Stuart McCloskey’s disallowed try.

They were stand-out moments, even if Mathieu Reynal and his TMO wrongly decreed that the latter pass was forward.

“Yeah, glad you agree,” says Stockdale ruefully. “Obviously if I’m accelerating forward with the ball, the ball is going to travel forward in the air. That’s physics, like. It was a bit frustrating to see it disallowed.

“I didn’t feel like it was forward, but the TMO has a tough job. They get decisions right and sometimes they get decisions wrong and as players we’re always going to complain when we feel like they’ve got one wrong. But it’s the nature of the game, isn’t it?”

In any event, here was evidence that Stockdale can be more of a creator than the winger who initially established himself as an exceptional finisher.

“To be honest I’d probably enjoy the opportunity to set up tries rather than take them myself,” he reveals. “It felt really good. I obviously put Hugo in for one and I should have been able to get two [assists] on the board with the pass too. It was a frustrating game but it was also quite enjoyable to play in as well.”

Joint seventh on the list of top Irish try-scorers with 18, he’d like to play as well as he can and score tries every week. “But I’d say I’ve never been motivated by scoring tries, I’m motivated by putting in good performances. A lot of time on the back of those good performances is when you tend to score.

“It’s a nice thing to have beside your name that you’re in the top 10 try-scorers for Ireland. As my career progresses I hope that I keep climbing that ladder, but we’ll see.”

Mindful of James Lowe’s impending eligibility, giving Stockdale a run at fullback was clearly part of a plan hatched during the 2020 hiatus. Previously, of his 63 games for Ulster, only six were at 15, when he showed glimpses of his potential there, not least in his offloading ability in the outside channels. His first 28 Tests were also all on the left wing.

Hence, there were always likely to be teething problems. Fullback has become a particularly challenging position, covering the backfield, competing in the air, possessing a strong kicking game, hitting the line effectively and maybe offering a two-sided attack. After five games at fullback for Ulster and three for Ireland, Stockdale is becoming “more comfortable” with the position.

“Just figuring out where I need to be on the pitch at different times in the game has been a massive learning point for me and something I definitely need to get better at.

He played fullback in his standout Irish Under-20 days, so the ability to make long passes has always been there.

“There’s a certain [element of] getting used to being in the middle of the pitch and looking for options. When you’re on the wing your mindset is carry and try to beat defenders because there’s rarely anyone inside or outside you as an option.”

Both of last Sunday’s “try” assists came from skip passes by his Ulster teammate Billy Burns. This will only be his third game playing alongside Sexton, who carried the drinks for the last two games.

“I’d say we’ll be better hydrated because he’s a useless water-boy,” quips Stockdale before adding: “He’s a very competitive player but in terms of preparation, there’s no better player in the world. He prepares massively for every game. He knows each team inside out. Playing outside him, that brings you a lot of confidence and it pushes the rest of us to make sure we do our prep as best as possible as well.”

“On top of that, when you’re training to play with him, he’s obviously a very talented player and a great decision-maker. He reads the game very well and has a massive amount of experience in that sense.”

Come the new year, Stockdale will come under stiff competition for the 15 jersey when Jordan Larmour returns. The emergence of Hugo Keenan, less prone to error, in the back three has been one of this window’s clear positives. Will Addison might return and Lowe is a serious option at 11.

Whatever happens, it’s no harm if Stockdale develops the versatility to play 15 as well as 11. There may be another few heebie-jeebie moments along the way. By his own admittance, he still has improvements to make if this is to be a differently defined phase two to his Test career.

But there are some promising signs Stockdale could become the second playmaker Ireland need. The jury is still out and it’s high-risk, but it’s worth the investment.