Jones targeting final victory as a springboard to a better place 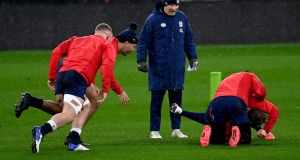 Eddie Jones observes his England players during a training session at Twickenham Stadium, London. “We lost our last final, so the big thing is to win.” Photograph: Andy Rain/PA

The inaugural Autumn Nations Cup has not always felt like a substantial meal, but something more nourishing might just await at Twickenham. It is a final, for a start, with a title at stake and, glory be, there will be 2,000 real live fans in attendance. If ever there was a year to be grateful for small mercies, this is surely it.

It also offers England a chance to show they can respond to all-or-nothing end games rather better than proved the case in last autumn’s World Cup final. This fixture against a below-strength France is nothing like as pressure-laden, but Eddie Jones is determined not to make the same mistakes he now thinks contributed to England’s downfall against the all-powerful Springboks.

With the benefit of hindsight Jones feels England almost tiptoed towards the biggest game of their lives, underestimating the need to take a fresh guard mentally in the days after smashing the All Blacks in the semi-final.

“In retrospect we probably didn’t attack the week like we normally do. It’s not necessarily a conscious decision. Sometimes you think: ‘Well, we’ve just got to continue.’ In sport there’s no such thing as continuing, you are either going up or you go down. We’ve made a big effort this week to attack the week, not to sit back, and to see where we can improve our game.”

Hence the selectorial thinking, too, behind an England starting XV which contains a record 813 caps – compared with France’s paltry tally of 68 – and sees just one change, with Anthony Watson returning in place of his injured Bath teammate Jonathan Joseph.

It might seem the equivalent of using a sledgehammer to crack une petite noix, but Jones clearly reckons there is still plenty of time left before the next World Cup in 2023 to examine the claims of Dan Robson, Max Malins, Ben Earl, Jack Willis and Ollie Thorley. More valuable, to his mind, is sending out a message to all and sundry that England, having won the 2020 Six Nations, remain fully committed to raising the bar every time they take the field.

And if world domination is the stated aim, what better role model for Jones to choose on BBC Radio Four’s Today programme than cricket’s incomparable Sir Vivian Richards? Even the Master Blaster’s slow, deliberate swagger to the crease was a warning to the bowler and, sure enough, the ball would usually disappear to all parts.

“We’d like to play like Viv Richards used to bat,” said Jones, glossing over the fact that the West Indian legend played his last Test before the majority of this England squad were born.

“Everyone wants to play beautiful rugby and we’re no different. Sometimes the conditions are conducive to that and sometimes they’re not, but we want to be a dominant force in world rugby.”

None of this will mean much to the French, but Jones reckons England are currently more like Australia’s captain Steve Smith: not particularly elegant but increasingly hard to dig out.

“His ability to control the bowler is fantastic and that’s where rugby is going,” insisted the head coach. “At the moment defence is in the ascendancy but teams will work out how to attack rush defences and we’re in the process of developing our own attacking system to do that. It takes time.”

There have been few instances of England hitting much off the square, never mind over the pavilion, in an attacking sense over the past month but this weekend should offer the opportunity to flex their muscles at some point.

While the new-look visiting side contains several excellent up-and-coming talents, even the organisational genius of Shaun Edwards will be hard pushed to knit Les Bleus into a collective unit capable of winning at a venue where no first-choice French team has beaten England since 2007.

It is easy to see the visitors, with nothing to lose, displaying plenty of early spirit but, as Georgia, Ireland and Wales can testify, getting smashed by Tom Curry, Sam Underhill and England’s other enforcers for 80 minutes soon becomes hard work, particularly with temperatures forecast to be on the froid side of chilly.

Nor is it terribly likely that England will opt to throw caution to the winds, at least not until their forwards have propelled them into a significant lead. According to Jonny May, the sharpest knife in the red rose tool box, the notion of wingers floating around on the periphery like nervous debutantes, is a throwback to a now-defunct era.

“When I was young I used to think being on the wing was all about being in space, scoring tries, and making line-breaks. Now my mindset more than ever is chasing kicks, leading the defensive line, communicating, winning in the air. I build my game around that.”

Given May has already scored seven tries in seven Tests against France, there must be a decent chance of him adding to the brace he bagged when England were last beaten, in Paris in early February.

It could be that these two sides have several high-profile duels to come in the next few years, and it is already evident that Jones will not rest until England’s 2019 final pain has been assuaged.

“You never put it to bed. We weren’t good enough in that World Cup final. Even if you win the next World Cup, it stays with you. And that is what drives you to keep on wanting to get better. In any sort of sport you are in a cycle of success and failure – as soon as you’ve had success, failure is sitting next to you. And vice-versa.”

Which is why this weekend, psychologically, looms as a potential springboard to a better place.

“When you lose a big final like that it stays with you for a long time,” said Jones. “You reflect and think: ‘I should have done that, would that have made a difference?’ Then you consistently hear criticism of what you’ve done, which drives you a little bit more. You have got to learn from it. We are absolutely blessed within 13 months to have the opportunity to play in a final again. We lost our last final, so the big thing is to win.”

If his full-strength side fail to deposit France’s callow understudies straight back over the sightscreen, then Viv Richards should sue.