Australia rule out taking a knee against All Blacks 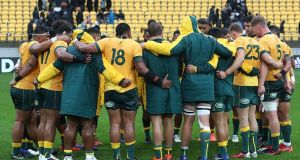 Rugby Australia claim the team were “unanimous” in deciding not to take a knee against the All Blacks later this month. File photograph: Getty Images

The Wallabies will not take a knee in support of the ‘Black Lives Matter’ campaign ahead of next week’s Rugby Championship game against New Zealand as they will be focused on honouring Australia’s indigenous people, coach Dave Rennie said on Friday.

Australia will wear a new ‘First Nation’ jersey for the game on October 31st, but despite fullback Dane Haylett-Petty suggesting they might also join other sports in the protest against racial injustice, Rennie said they had voted against the idea.

“We won’t,” Rennie said on a conference call when asked if they would take a knee.

“Our focus is around the First Nations people and the indigenous jersey; we’re not looking to make a political statement.”

Gary Ella, who along with his brothers Mark and Glen played for the Wallabies in the 1980s and carved a path for indigenous Australians in rugby union, told the Sydney Morning Herald on Thursday that Farr-Jones’ comments were “stupid talk”.

Rennie added that the coaches had discussed the issue on Thursday with the team’s leadership group when they assembled to prepare for the All Blacks test, which also doubles as the third match in their Bledisloe Cup series.

The group then went to the players, awho were “unanimous” in deciding not to take a knee.

Rugby Australia interim chief executive Rob Clarke said in a statement that the organisation and the team condemned any form of racism or discrimination while acknowledging that they were “still on the path to reconciliation”.

“The First Nations jersey is a strong statement in itself, and the Wallabies are incredibly proud to wear it, what it means and who it represents,” he added.

Meanwhile former Australia flanker and captain David Pocock has retired from all rugby and will now concentrate on campaigning for conservation causes and work on rugby development programmes.

Pocock stepped down from international rugby following last year’s Rugby World Cup in Japan after 83 caps, but stayed in the country to play for Panasonic Wild Knights in the Top League.

“While it was a tough decision, it really feels like the right one now and as a lot of former athletes talk about, it’s not going to be smooth sailing but its going to be a great challenge,” the 32-year-old told Rugby Australia on Friday.

Pocock was born in Zimbabwe but political unrest in the country forced his family to move to Australia in 2002. He made his debut for the Wallabies in 2008 and he was appointed captain in 2012 but suffered the first of several serious knee injuries in 2013 and was then replaced as the Wallabies first choice number seven by current captain Michael Hooper.

Successive coaches tried to play the pair in the same team with Pocock often playing number eight, which created issues with the balance of the side, although they still made the 2015 Rugby World Cup final against New Zealand.

Pocock often bucked officialdom and was vocal in his support for women’s rights, same sex marriage and for the environment, and was arrested in 2014 at a protest at a coal mine in northern New South Wales.

Pocock, who is completing a masters degree in sustainable agriculture, said he would now also work on development programmes for young rugby players.

“Rugby has given me so many opportunities, and I’m really keen to continue supporting the next generation of players here in Australia and in Zimbabwe,” he told the Guardian. “There’s so much young talent in both places.”