With an average age of 28 for Italy match, squad has an opportunity to regain its mojo 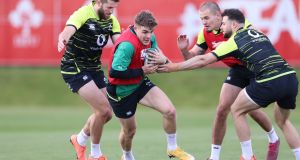 On Monday Garry Ringrose was asked a long-winded question that will never stimulate the mind of an athlete.

With five of James Ryan’s groundbreaking Ireland under-20s team from 2016 now in the senior squad, and considering the All Blacks’ ability to maintain sensational standards after flooding their ranks with fresh faces, should this be viewed as a similarly new era for Irish rugby?

“I wouldn’t really overthink it too much,” Ringrose replied. “What Ireland has achieved in the past certainly sets the foundation and what we’ve done before we’re looking to do again.”

“That’s the objective that everyone in here has. I wouldn’t overthink it to describe is as a new era or anything, but it’s just a massive opportunity.”

Fair enough. Why heap more pressure on yourself leading into two Six Nations games against Italy and France?

But this is a new era. Undoubtedly so. The last traces of the 2009 Grand Slam disappeared at the Ajinomoto stadium in Tokyo last year. Seven of the side New Zealand trounced 46-14 will reappear for kick-off against Franco Smith’s Italy on Saturday afternoon in Dublin. Ringrose is joined by Jacob Stockdale’s exciting switch to fullback, the usual halfbacks clock up 174 caps between them, Cian Healy should increase the Irish centurion club to six members in Paris next weekend, CJ Stander remains unbreakable and Ryan is odds on to be man of the match.

The 2009 and 2018 Grand Slam teams provided all the necessary ingredients for success: the perfect blend of prodigious youth, mostly from the Leinster schools reservoir, and established veterans. That is how Ireland win trophies. That is how they beat the All Blacks.

Take the championship-clinching victory at Twickenham in 2018. Ryan, Stockdale, Andrew Porter and Larmour forced Joey Carbery, Ringrose and Furlong out of their rookie status that season.

The average age was 27. They had 638 caps between them. That’s a strong average of 43 test matches in a team zealously constructed to capture a third Six Nations title in five years – so much so that come 2019 they were overcooked. Spent.

Saturday’s average age is 28, with 493 caps in the starting XV for an average of 33 appearances. The dip in experience is offset by Hugo Keenan and Will Connors – Ryan’s men from 2016 – making their international debuts.

Most sections of the Ireland depth chart are stronger in 2020, some players have stagnated while other positions remain worryingly reliant on key personnel.

The Grand Slam midfield from 2018 – Ringrose and Bundee Aki – return with 27 more caps, a plethora of awards for the 13 and enough physicality from the 12 to have him capped by his native New Zealand several times over.

Murray (81 caps) and Sexton (91) are marching into their mid-30s, but an ability to control games, which had them rated as a global force, remains attainable.

Stockdale, Stander and especially Ryan are bringing their games to another level.

Dan Leavy is on the bench for Leinster on Friday night against Zebre. Peter O’Mahony edges Josh van der Flier to cover a nicely balanced backrow of Caelan Doris, Connors and Stander. Furlong and Henderson will eventually return to enhance a pack that will always struggle to contain the nations ranked above them.

Ryan Baird will be added to the equation soon enough and the debate about who is the superior athlete – Ryan, Doris or Baird – can begin.

Andy Farrell’s side will have many special days if everyone mentioned here stays fit. This happens once, maybe twice a season in every decade.

If an Ireland pack includes Porter, Ronán Kelleher, Furlong, Baird, Ryan, Leavy, Stander and Doris, then anything is possible, so long as the alternatives are at the very least bigger men (Dan Sheehan makes his debut for Leinster on Friday night).

At the moment, seven probable starters are unavailable. “At the moment” will almost always be the reality Farrell must work around.

“It’s definitely a great environment to be a part of,” Ringrose added, “especially with those new faces in as well.”