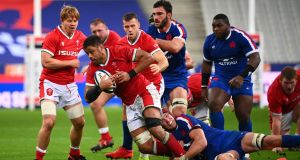 France lock Bernard Le Roux has been cleared to play against Ireland in Saturday night’s Six Nations clash at the Stade de France after a disciplinary hearing on Tuesday.

The 31-year-old South Africa-born player appeared to strike the head of Wales skipper Alun Wyn Jones with his forearm in the first half of France’s 38-21 home victory in Paris last weekend.

Le Roux faced a minimum ban of six weeks but was cleared after a Zoom disciplinary hearing on Tuesday afternoon.