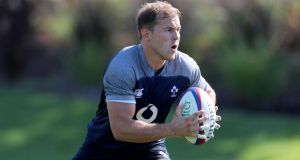 Will Addison is in line to play fullback in the World Cup warm-up against Wales in cardiff on Sunday. Photograph: Dan Sheridan/Inpho

Opportunity knocks for one last time before Ireland’s 31-man squad is finalised for the World Cup when Joe Schmidt announces his side to face Wales in the Principality Stadium on Saturday at lunchtime on Thursday.

Will Addison is in line to start at fullback in his first appearance of the warm-up programme while Jack Carty is expected to make his first Test start outside Connacht halfback partner Kieran Marmion, with Peter O’Mahony set to captain the team from openside.

Addison’s injury woes of last season and delayed pre-season have seemingly dropped him down the pecking order but a strong showing in Cardiff would augment his valuable versatility. Addison can play at fullback or centre, and can even fit in on the wing and outhalf at a push.

Schmidt’s encouraging update on Joey Carbery’s recovery from an ankle operation augurs well for his chances of making the plane to Japan, not least given his versatility, but it still seems likely that a third outhalf will be named alongside Carbery and Johnny Sexton.

Of his five appearances to date off the bench, Carty particularly caught the eye with an eight-minute cameo – which by rights should have been longer – in this very same stadium last March. His late intervention at least prevented Ireland being ‘nilled’ in that 25-7 defeat which sealed a third Welsh Grand Slam under Warren Gatland’s watch.

If Carty can demonstrate his ability to organise the team and do the basics, in addition to providing his spark of creativity, his chances of travelling to Japan will be greatly enhanced.

Dave Kilcoyne is also likely to have a chance to stake his claims for inclusion in the squad, and ditto Niall Scannell and John Ryan in all-Munster frontrow. James Ryan has been pencilled in for his seasonal re-appearance along Iain Henderson, one of just four players retained from last week’s starting XV against England.

In addition to Bundee Aki and Jacob Stockdale, the other survivor could be O’Mahony, but interestingly he is due to start and captain the team from openside.

After a strong finish to last season, Jack Conan is also expected to make his first start of the season at number eight in what is a chance to both re-affirm his claims not only for a position in the World Cup squad but also the starting XV.

Interestingly, Tadhg Beirne looks set to start at blindside flanker, with Andrew Porter seemingly set to cover loosehead – which augurs well for his chances of being included in the World Cup squad as one of five props – and Rory Best and Tadhg Furlong also expected to be named on the bench.

Ross Byrne is also in line to be named on the bench, with Sexton kept back until next week’s final warm-up game against Wales in the Aviva Stsdium. The same is likely to be true for Rob Henshaw and Keith Earls.

Similarly, Jarrod Evans is expected to make his first Test start at outhalf and thus stake his claims to be Dan Biggar’s understudy after winning two caps off the bench. The 23-year-old is a confident, free-running outhalf.

Two 21-year-olds, winger Owen Lane and Saracens-bound loosehead Rhys Carre, are also anticipated to be given their first Test starts by Gatland, for whom this will be a final home game in his 12-year reign as head coach at a sold-out Principality Stadium.

Josh Navidi is set to captain a much-changed team for the first time from number eight, with Scott Williams due to make his first Test appearance in over a year after his injury problems, with fellow Osprey Owen Watkin joining him in midfield.

Adam Beard is likely to return to the secondrow, while James Davies is set to be given another chance on the openside flank, providing he receives the all-clear after being forced off with concussion against England.

Wales have just returned from a warm-weather training camp in Turkey where temperatures got up to 42 degrees.

Gatland is expected to announce Wales’ 31-man World Cup squad this Sunday, whereas although Ireland will also submit their squad to World Rugby on Sunday or Monday, it is expected they will wait another week before confirming their squad publicly.