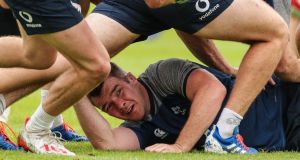 Ireland’s Peter O’Mahony during training at Carton House, Kildare, ahead of their Test match against Wales. Photograph: Billy Stickland/Inpho

Purging the disappointment of Twickenham has been a two-day affair on the training ground and with the running repairs completed the Ireland team must face into a trip to the Principality Stadium on Saturday, hoping to find a cure for a malaise that has seeped from the tail end of the Six Nations Championship into the Rugby World Cup warm-up matches.

Now a trip to the home of the world number one side and Grand Slam champions in head coach’s Warren Gatland’s final game in Cardiff – he steps down after the World Cup – doesn’t appear an obvious panacea for all that ails Ireland in rugby terms at present, albeit that Wales won’t be at full strength.

Peter O’Mahony won’t have enjoyed the trauma of the post-Twickenham collective review, nor is he likely to have found the unburdening experience, cathartic. He is though adamant that there will be a positive reaction on Saturday.

That’s still a few days away so for now all he can do is talk about what went wrong and how it’s fixable. “We got a harsh reality check over video analysis sessions over the last couple of days. We’re certainly not going to stand here and make excuses. It was a poor, poor performance.

“It’s a record defeat. It’s not something that we are used to. We know that you take the 24 hours and you feel sorry for yourself, but the beauty of this game is that you have another one this weekend. Whoever gets selected this weekend has a huge, huge responsibility to put the green jersey back in a good place.”

Breaking it down follows a familiar pathway, the pressure points of missed tackles and a misfiring lineout that jammed up horribly are obvious starting points. O’Mahony said: “I’m not going to say it [analysing the lineout issues] was harsh but you have got to be straight up.

“The teams that we are coming up against are too good. Some of the way we have performed lineout wise at the weekend, some of the stuff was in our control. We were just particularly sloppy.”

His assertion that it’s normally an area of strength would be true in a general sense but less so in recent times as three matches in the last six months, England twice and Wales, have shown emphatically that Ireland’s performance levels can be destabilised by attacking their lineout.

Post-match dissection is cold and calculating rather than times past when a reaction to a poor performance was meted out physically. O’Mahony explained: “In the old days, you would have gone out and belted each other around the place but we can’t afford to do that. You’re going to get guys injured.

“There is an emphasis on things certainly that we’ve picked out in which we want to see a big change in training but I’m not going to come out and tell you we kicked lumps out of each other. We didn’t. You can’t do that. We went out, we had two good, clear rugby sessions; we got through a lot of work and fixed a lot of things which was important for us.”

O’Mahony doesn’t put much store in “the poor dress rehearsal, good opening night” analogy when weighing last weekend’s performance against what the squad can take into the opening game of the Rugby World Cup against Scotland.

“Look we don’t see it that way. They’re Test matches. You hear people saying ‘oh maybe it’s a good thing’. It’s not a good thing to lose a game like that. We’re not going to bulls**t ourselves by saying ‘that might be the best things for us’.

“That’s not the best thing for us. But as you said it wasn’t a World Cup game, we’ve time, we can sort it. It is certainly better that it happened now but that’s kind of a bulls**t saying as well, we’re not going around trying to claim it.”

Defence is another issue that received a prolonged airing but he argued that Ireland weren’t at the physical pitch they needed to be in both attack and defence. “You’ve got to see us all at Test match level and Test match pace and I think we were off the pace, both sides of the ball, at the weekend. You’ve got to see an Irish team at the pace we want to play with and make it difficult for Wales.

“There certainly isn’t any panic of any sort. Guys understand that [what] we got wrong at the weekend and we understand that it doesn’t turn on its head overnight. There are things that have probably manifested that we need to sort out in our game. That’s a good starting point to get it sorted.”

There is a restless energy that is probably mimicked by all the players in the squad, that the time for talking is nearly at an end and that they get to make good on all that’s been spoken about on Saturday afternoon in Cardiff.