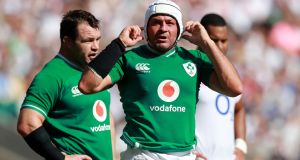 Rory Best: needs a big game over one of the next two Saturdays against Wales after his struggles at Twickenham. Photograph: David Rogers/RFU/The RFU Collection via Getty Images

Let’s begin by looking at the positives. Things can hardly get any worse, or at any rate this Ireland team can hardly play any worse, can they?

Furthermore, the sheer scale of Saturday’s defeat by an England team which seemed light years ahead in terms of physicality, fitness, skill set and cohesion, and which appears way more plausible World Cup contenders, might even make it both a serious wake-up call and more feasible for Joe Schmidt and the coaches to make changes.

These two are interconnected, for if the majority of the front-liners who underperformed in Twickenham are given a chance, most likely in the home leg of the final two warm-up games against Wales, then they will be in desperate need of a big performance.

It is customary for the opposing head coaches to have dialogue before these warm-up games, with Schmidt having been in contact with Conor O’Shea before the Italian game.

In the presumption that the same applied between Gatland and Schmidt, it is therefore somewhat surprising to hear speculation that Josh Navidi, who will pack down at ‘8’, looks likely to lead an experimental Welsh team showing just a couple of survivors from the side that started the 13-6 victory over England in Cardiff a fortnight ago.

Given it was going to be Gatland’s final home game of his remarkable 12-year reign as Welsh head coach, and their team’s send off to the World Cup, the expectation was that the Red Dragonhood would be at full strength and breathing fire.

There may also be debuts for uncapped duo Owen Lane and Rhys Carre, while outhalf Jarrod Evans may make his first Test start in light of the unfortunate Gareth Anscombe being forced out of the World Cup.

It was always likely that Jack Carty had been earmarked for a full Test debut next Saturday, and not only would that seem even more probable now, but others will be called in too before both sides are deemed to be at optimum strength on Saturday week in the Aviva Stadium.

If this is how the next two weeks pan out, then next Saturday at Cardiff constitutes a huge opportunity for those not involved in the Twickenham thrashing to state their claims. But now we’re not talking so much about places in the 31-man squad to be submitted to World Rugby as starting places in the game against Scotland on September 22nd.

Uppermost amongst these, of course, is the trickiest issue of hooker and by extension the captaincy. The disconcerting aspect of Rory Best’s performance was that his wayward darts not only compounded low numbers (four carries and four tackles, with three missed and none of the trademark jackalling over the ball) but his throws did not seem to be spiralling with much confidence.

Captaining one’s country is a big responsibility, and maybe too this is weighing on Best a little. Aside from his performance, one struggled to hear the Irish captain in Nigel Owens’ ear all day.

For example, when the Welsh referee warned Maro Itoje to stop stepping across the lineout before the ball was thrown in or he would be penalised, the wonder was that the Irish captain had not already raised this matter with Owens.

Best will have a huge standing within the squad, and deserves it after leading Ireland to a Grand Slam, two wins over the All Blacks and so much more. It’s hard to imagine Schmidt dropping his captain on the eve of the tournament as things stand, but Best needs a big game over one of the next two Saturdays against Wales.

Jean Kleyn having been given two starts and the lineout malfunctions having yet again heightened Devin Toner’s importance in his absence, there’s also the issue of who partners James Ryan in the second row. Likewise the backrow, where the unusually quiet CJ Stander will surely feel the heat from Jack Conan.

Ireland seriously need a healthy Conor Murray and Johnny Sexton back in tandem. The midfield would always have been hotly contested were the centres ever fit simultaneously, but now the back three has become another source of concern.

The wingers were badly exposed by the malfunctions, lack of connection and line speed against England. The official match stats have upped Ireland’s number of missed tackles last Saturday to 38, and one ventures Ireland’s own analysis will have put that in the 40s, which demonstrates how Irish players weren’t pushing up and taking the tackles on their terms.

Indeed, in addition to a heightened number of selection issues, Schmidt and co (especially Andy Farrell and Simon Easterby) have broader issues to concern them with regard to the lineout, defence and attack.

As well as the stark contrast in line speed it was striking to see the different approach to offloading last Saturday. The crackdown on high hits and leading with elbows, not applied rigidly by Owens, has clearly opened up greater possibilities for offloading.

As much as their physical successes on the gain line, England stretched and stressed the Irish defence with their offloading game. The officials stats gave England 13 offloads to Ireland’s two. It felt like more.

Ireland looked like a team that needed to loosen up and take a few more risks in attack, while tightening up in defence. It also seemed as if the pre-season training and especially the warm weather camp in Portugal had taken the legs out of them.

In terms of time off and game management, England looked mentally fresher as well as fitter after a five-week off season. The Irish players, after just three weeks off, appeared in need of a respite.

However, one final positive note to finish on. Schmidt is a brilliant, clever coach and around him are a host of high-achieving, quality players and assistant coaches. It’s still a winnable group and they’re still well capable of a big performance in the quarter-finals.