Australian media in no doubt ‘Ireland were the better team’ 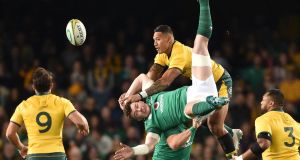 Israel Folau challenges Peter O’Mahony in the air, an incident which led to a yellow card for the Australian back. Photograph: Peter Parks/AFP/Getty

The consensus amongst the Australian media was that the three-test series against Ireland was a success on and off the pitch, and while they had misgivings with regard to some of the officiating they were generous in their praise for Joe Schmidt’s side, the majority acknowledging the visitors were just about worthy winners.

In the Sydney Morning Herald under the heading “Ireland withstand late Wallabies onslaught to take series”, Tom Decent wrote: “A tenacious win from the Wallabies in Brisbane and an energy-sapping loss in Melbourne has been followed up by a draining loss at the death that handed Ireland their first series win in Australia since 1979.

“The home side had a number of questionable decisions go against them and will feel hard done by. Australia were starved of genuine try-scoring chances and, to Ireland’s credit, they executed a similar game plan to what they produced in the second test.”

In the same paper under the headline “Series gets the right result – Ireland were the better team” Paul Cully focused on the aerial issues that have posed problems for World Rugby in recent weeks, manifest in French fullback Benjamin Fall’s sending off in the second test for a collision with New Zealand’s Beauden Barrett, a red card that was rescinded by the sport’s governing body on review, and the incident involving Wallaby fullback Israel Folau who was sent to the sin bin for a mid-air clash with Peter O’Mahony.

It was the third time that the Irish captain finished on his back competing for a high ball and it marked his departure from the match. Cully wrote: “Rugby also has a problem with the aerial contest, because we are addicted to it as a contest although it is putting the players in peril. No wonder World Rugby CEO (Brett Gosper) announced after the third test in Sydney that both areas would be looked at in a review of all the June tests. Rugby also has an issue with breakdown interpretations, although that issue is as old as the hills.

“There was no more worrying sight in Sydney than Irish captain Peter O’Mahony being repeatedly lifted into the night air and coming down at horrible angles. When Israel Folau was yellow-carded it was O’Mahony’s third heavy fall. Folau’s attempts to regather the ball were honest but the sight will no doubt send shivers down the spine of World Rugby.

“If a player is being lifted from a static position for short restarts it puts them into a tremendously vulnerable position and the player attacking the ball – Folau – is always going to be the one penalised. Folau had hands on O’Mahony – it was a penalty – and if World Rugby continues to allow the lifter then it puts Folau at constant risk of sanction. The leap is undoubtedly his greatest attribute but the Irish tactic of dealing with it has caused all sorts of problems for World Rugby.”

Cully was unequivocal in his assertion that the right side had won the series. “What rugby doesn’t have an issue with is this: over three games the better side, the more clinical side, usually wins the series... that side is Ireland.

“They came to Australia and in every game imposed their game plan for large periods and ran for more metres in every clash. And when they finally ran out of gas in the final 20 minutes in Sydney, Bernard Foley missed a penalty, Foley knocked on, and Samu Kerevi did likewise. Sometimes the officials can simply be the easiest targets.”

Georgina Robinson writing an opinion piece in The Age newspaper raised a number concerns about officiating and how All Blacks coach Steve Hansen supported some of the concerns that his Wallaby counterpart Michael Cheika raised in the aftermath of the Ireland’s win. She quoted Hansen as saying: “It’s an area of the game that World Rugby needs to take some ownership of and lead.

“You’ve got Cheiks [Cheika] not happy with how his game is reffed too. It’s got faster, it’s got really fluid but we haven’t really changed the way we ref. It has got to a point where we have got to do something because it is starting to affect the game.”

She also mentioned Hansen’s suggestion that coaches be allowed two challenges during a match ala cricket.

Robinson raises several interesting and well argued issues. “The important distinction this time around is that it is not coaches and players bleating about the rub of the green. In Sydney the conversation has been dominated by head-scratching bewilderment.

“What is okay and what is not okay in the aerial battle for the high ball? When did that change? Why are off-the-ball tackles sometimes penalised and other times overlooked? Notwithstanding the human error intrinsic to, well, human endeavour, why does it feel as though the inconsistencies are more striking than ever before?

She goes on to conclude that “the more science reveals about contact sports and head injuries, the bigger this issue will get for rugby. The game is getting faster and harder, but the science will not go away.

“Which is why it is so important for the governing body to stay on top of their game as far goes communication and application. That should include giving serious consideration to reforms suggested by the game’s top coaches, including Hansen’s challenge system concept that would allow two challenges if coaches disagreed with rulings.”