Matt Williams: New Zealand are in Dublin to crush a Celtic uprising 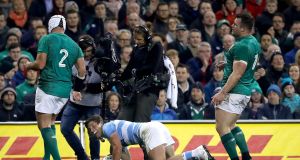 When Ireland played New Zealand at Lansdowne Road in 2001, I took my then seven-year-old son, Teddy, hoping his first international rugby experience would be exceptionally memorable. It was, but for all the wrong reasons.

To watch the great New Zealand team playing at the iconic old Lansdowne Road was unique for a boy born in Australia. To add a personal touch, the then Ireland coach Warren Gatland, had asked me to coach the defence for the Ireland team that November, as Leinster, who I was coaching, had no matches.

But not all parental plans go as planned.

As the New Zealanders gathered to perform the haka, I lifted Teddy in my arms so he could see over the swarm of heads, I glanced at his face. His mouth was half open with a look of awe on his beautiful seven-year-old face.

The trouble was he was looking directly away from the action on the field. He whispered in my ear, “Dad, there’s James Bond!” As I started to turn around and laughingly say, “Don’t be silly . . .” Sure enough, directly behind him was James Bond, Pierce Brosnan.

Ireland played their hearts out to lead 21-7 just after half-time in a highly entertaining match. Teddy saw none of it. He stared at 007 the whole time. If he had been stroking a cat saying “I have been expecting you Mr Bond” it could not have been more intense.

The previous week at Ireland training many of the non-Leinster players and staff had made it abundantly clear that I was as welcome on the training ground as Hillary Clinton at a Donald Trump rally.

Some thought that coaching a defensive system was a ridiculous over-complication. What I coached that week would be the same as I would to an under-13 team today. It was Defence 1-0-1. I was a year out of coaching the Waratahs in Super Rugby and technically Ireland were a long way behind teams from the south.

It was a reflection of Irish rugby at the time. Ireland always played with passion and exceptional toughness. They also had great players like Keith Wood, Mick Galwey, Denis Hickey, Shane Horgan, Brian O’Driscoll and that day’s outstanding performer, Anthony Foley. But the system the players had come through had not educated them with the required knowledge of attacking and defensive play for the on field demands of winning against the best on the planet.

Ireland lost 29-40, New Zealand running in 30 points in the last half hour. An all too common storyline.

Today, things are different. The Irish player development system is world class and the Irish players can compete with the best in the world. That is why today’s performance at the Aviva, against the world champions, will be crucial in assessing whether Ireland are real challengers to win the World Cup, or just another pretender.

It will be the two long suffering system issues that will make or break the men in green.

Joe Schmidt’s attacking system can best be described in the words of the late Australian billionaire, Kerry Packer, when described how Genghis Khan used to attack. “It was not very lovable, but it was bloody efficient.”

The Irish attack from set play, especially lineouts, is excellent. From phase play it is repetitive, brutal and unimaginative, but it is efficient. It lacks counterattack and spontaneity but despite this, Ireland are winning. As the rest of the world’s coaches, zombie like, slavishly copy the New Zealand attacking system, Schmidt has created his own. “The Genghis Khan attacking system.” It’s not very lovable, but it’s bloody efficient.

The big question is, can the Genghis Khan System create enough points to defeat New Zealand in a major match on a dry day? Today we will find out.

The second question is, can the extremity of the Irish defensive line cope with New Zealander’s width in attack? Last week I watched in horror as Rory Best and Cian Healy were the last two defenders on the Irish line, both 25 metres infield from the touchline, as the Argentinean winger, Bautista Delguy ran in his try unopposed. This does not fill me with confidence. To counter this, Andy Farrell coached the Lions to produce a lightning fast defensive line system, one that successfully pressured and frustrated the New Zealanders in 2017.

Today the world rankings are irrelevant. To win, Ireland must produce a performance similar to the first half against England last St Patrick’s Day. However, today it must be for the entire 80 minutes. Victory requires Ireland to play at a standard they have not achieved before.

New Zealand rugby is one of the great sporting business dynasties of all time. The silver fern symbol on their chest is a registered trademark and losing to Ireland is not in the business plan. New Zealand are coming here with the intent of a Caesar, crushing any prospect of a Celtic uprising. The aim is to wipe the memory of Chicago from the face of the earth.

I hope Ireland do not have an experience against New Zealand as I did in 2001. Memorable, but for all the wrong reasons.