Ireland set for three-Test tour of New Zealand in 2022 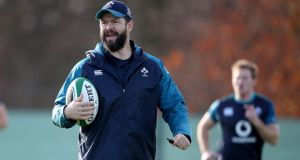 Andy Farrell: “I think fear drives players like that because they want to perform against the best.” Photograph: Dan Sheridan/Inpho

In addition to hosting the All Blacks again in November 2021, Ireland are in line to tour New Zealand for a three-Test series in 2022. It will be Ireland’s first trek there in a decade.

The Irish and New Zealand rugby unions are in negotiations to finalise agreement on the tour, but it is expected that the three-match Test series will go ahead.

End-of-season tours to New Zealand are both the most daunting and desired, generally providing the toughest challenge which any seasonal itinerary can throw up.

Ireland have lost all 12 Tests against the All Blacks in New Zealand, and the proposed 2022 tour would be Ireland’s first to New Zealand since 2012.

Coming at the end of a 52-week World Cup season, that trek was a particularly demanding exercise which culminated in a 60-0 loss in the third Test in Hamilton, a week after a late and contentious Nigel Owens scrum penalty against Ireland with the scores level led to a match-winning drop goal by Dan Carter.

Come 2022, conceivably Andy Farrell could have succeeded Joe Schmidt as Ireland’s head coach were the latter to end his tenure after the next World Cup. Emulating the model adopted by the All Blacks when promoting from within, it’s a role for which Farrell has looked primed for some time, and possibly in a role reversal with Stuart Lancaster from their England days together.

In any case, noting the buzz which next Saturday’s latest meeting with the back-to-back world champions is generating, Farrell commented: “You would expect it to be like that come New Zealand week. They’re the best team in the world for a reason and we get excited. We want to play against them as much as we possibly can.”

In under four years’ time he could have his wish, with Ireland also scheduled to host New Zealand in November 2021.

Farrell has a relatively decent record against the All Blacks, having been defensive coach when England (Twickenham, 2012), Ireland (Chicago, 2016) and the Lions (Wellington, 2017), although as he admits “I’ve lost against them a lot more than I’ve won as well.”

“There is no secret,” he said to beating the All Blacks, and there’s also “no doubt” the represent the toughest test for any defence, and for a variety of reasons.

“Their ability to stay calm and stick to the processes and not panic, play good territory, hit people on the break and play at speed. All the guys are comfortable on the ball. Nobody gets missed out, do they? They’re all good attacking players.

“Even their front rowers have got a good feel for time and space. They’ve been playing their system for quite some time now. They’re not trying to reinvent the wheel. They’re just very good at what they do.”

That Farrell oversaw the Lions defence for their tour to New Zealand last year can only be beneficial. All that analysis; all those experiences. But all those lessons too, not least the first Test defeat.

“The first game, they hit us through the middle, through the heart really. It actually hurt because they were more physical than us in the first Test. They played a very tight game, tried to take away our line-speed [in defence]. In the second game, we reacted to that and we got a response. So there is a lesson to be learned there, that the response has to be straight from the start.”

That Ireland have finally beaten the All Blacks, at the 29th attempt no less, hasn’t necessarily removed the fear factor when playing them, but that’s no bad thing to Farrell’s way of thinking.

“I think fear drives players like that because they want to perform against the best. They know it’s a chance that comes around once a year if that. It’s two years since we last played them so it is the fear of making sure we put our best foot forward and give a good account of ourselves individually and collectively. So I think the fear drives us a little bit.”

By and large, Ireland coped quite well with the Pumas’ inventive running game, although that said Ireland conceded six line breaks and even three days on Farrell looked none too pleased with the break off a lineout that led to Argentina’s try.

“Obviously it is a concern because you wouldn’t like anyone to break through, especially from a set-piece. There’s a few lads that are finding solutions for that and hopefully we will be more connected and finish the tackle entry off.”

Sexton, Furlong and Jack McGrath were also regulars in that Lions series, albeit so too were Sean O’Brien and Conor Murray, whose absence Farrell understandably played down.

“You look at Kieran Marmion and how he throws his body around, and it’s the same with Luke [McGrath] and Coons [John Cooney]. They’re the same type of animal really. They’re not ‘9s’ who have fear of contact, so we are okay there.”

Farrell also extolled Will Addison’s full debut at short notice last week and the defending of Garry Ringrose, and, as an interesting aside, another outside centre, Connacht’s uncapped Tom Farrell, has been training with the squad in Carton House this week.

Ireland’s upcoming fixtures outside of Six Nations and World Cup.