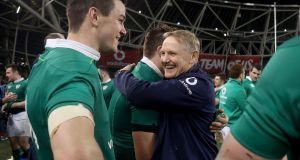 The system cannot be wrapped up and dependent on one person. That was the clear message delivered by IRFU chief executive Philip Browne when announcing the strategic plan for Irish rugby.

I don’t see Joe Schmidt taking another Northern Hemisphere job. He’s never going to get the same circular flow of player access if England or France coach. The club owners in both countries, and interlinked powers-that-be in each union, will never grant the level of control Joe currently possesses over rugby matters on our island.

The French and English cannot offer keys to the kingdom because, thus far, their unions have failed to unlock the club systems for the benefit of national progress.

Remember Joe’s demeanour and comments when Johnny Sexton was allowed to leave Leinster for Racing 92 in 2013? Schmidt was understandably concerned that Johnny would not return with the same levels of durability. Luckily for Irish rugby Johnny came back a better player. Better than any of us who played alongside him could have envisaged. Maybe Ronan O’Gara’s influence in Paris added the necessary arrows to Sexton’s quiver.

The FFR and RFU can offer Schmidt riches beyond his wildest dreams, but coaching is a calling, and to deliver at this standard has to be about more than the money.

I’ve done a few job interviews where people tell me one thing but the reality of the role is entirely different.

There will never be a Schmidt and Leo Cullen-type conversation with the Montpellier or Exeter coach.

McCall and everyone’s livelihood at Sarries depends on Farrell wearing the 10 jersey every weekend. That’s only going in one direction: more rugby – 35 games a season for English players, I feel, will prove 10 games too many.

Is the system wrapped up and dependent on one person? Only time will tell

Imagine Schmidt having to stomach his most important cog playing 560 out of a possible 640 minutes with a full 80 minutes clocked in eight matches, and only sat down once with a dodgy back. They are Farrell’s numbers since September 2nd.

Sexton’s season took flight on September 15th with 65 minutes against the Dragons. He entered Ireland camp with 356 minutes in the tank from just five starts. Just once, in Toulouse, did he complete the full 80.

This staggering difference of 200 minutes between marquee players in Ireland and England encapsulates the gulf between a finely tuned and an unworkable player welfare system.

Schmidt would have to reconcile such numbers before following Eddie Jones into the Twickenham labyrinth.

That leaves Ireland or the All Blacks as his next contract (it’s possible, but I can’t see him taking a Pep Guardiola career break).

Better the devil you know or leave his home from home to return to New Zealand and follow the Steve Hansen era – if that’s what the All Blacks even want – with the base expectation in that job being perfection.

Either way, The Decision is coming after these four November outings.

The Irish system gave Joe everything he needed to create an environment that transformed Ireland into a trophy-gathering rugby nation. Two European cups and three Six Nations on his watch since 2013 is unprecedented success with more promised this season.

Is the system wrapped up and dependent on one person? Only time will tell.

With Schmidt or whoever is at the helm for the World Cup cycle after Japan 2019, the obvious aim would be to get the Munster and Ulster academies producing their own position-specific talent; an achievement that would make Irish rugby more powerful than ever.

How about Schmidt not resigning until 2023, but taking a leave of absence during the 2021 Six Nations and summer tour to coach the British and Irish Lions against Rassie Erasmus’ Springboks?

That wouldn’t be a hard sell for punters (even if the ridiculously tight five-week time frame created by the English clubs, again, seems unworkable). Ireland could follow the Warren Gatland model in Wales with Andy Farrell accelerating the eventual succession process after Schmidt has done 10 years in charge.

Or he never, ever leaves.

We shall see. Right now Ireland is Schmidt’s club team with 13 games to prepare to go where no Irish men’s side has ever been before – a World Cup semi-final.

Now is the moment to attempt the spectacular or, at the very least, unveil the next layer of Ireland’s attacking philosophy. Keeping everything guarded and producing flawless moves on the Carton House pitch has no guarantee of fully translating come a World Cup quarter-final.

The team can only truly evolve in the games against Argentina and New Zealand. Show their hand in real time because they can always bluff future opponents.

Johnny and Conor Murray are the masters of this poker-esque rugby but Joey Carbery and whoever Schmidt chooses as scrumhalf understudy needs more exposure to become comfortable at test level.That’s the value of the Chicago trip to face Italy.

Durability becomes a major factor now. I’d also like to see how Dan Leavy and Jordan Larmour progress over the next 12 months, because if the young players continue to grow the team will strengthen.

There is a constant worry about Ireland being severely weakened if we lose Sexton, Murray or Tadhg Furlong, but this applies to every team.

New Zealand might have unending depth, but take Beauden Barrett out of their squad. Sure, Richie Mo’unga looks world class, but he isn’t Barrett. Just like Barrett isn’t Dan Carter (Not until he clips drops goals to see off South Africa and Australia in knockout World Cup matches).

The All Blacks remain 20 leagues ahead of the contenders – mainly because they constantly seek to evolve their attack on the pitch without fear of error – but they lack the control we saw in 2015.

Neither Barrett nor Damian McKenzie seriously contemplated a drop goal in the dying seconds against South Africa. They wanted to win the All Black way, with élan, with a try flowing through both their hands.

The lack of decision-making lost them that game. Such experience will probably make them unbeatable next year, but this is how to get at them – the Springboks and to a lesser extent Argentina got under their skin. Ireland managed it in Chicago two years ago, and the Lions exposed a soft underbelly by stymieing Plan A. Make them reliant on Plan B and see where the contest goes. Force them to kick goals.

I can’t wait for Twickenham and Dublin.

Now is the time for Schmidt’s Ireland to investigate the resolve of Argentina and New Zealand but also of themselves, because the Six Nations remains an island where victory by any means necessary denies the same level of risk-taking.

The concepts we see unfolding at the Aviva stadium on November 10th and 17th will get us past Japan, Scotland, South Africa and into a World Cup semi-final.

I am confident this Ireland group will grow as, not unlike New Zealand, they now possess a calmness in possession. There was real precision evident this past year – that methodical build-up for Johnny’s drop goal in Paris and strike play for CJ Stander’s try at Twickenham – which comes from five years working under Joe.

Encouragingly, there’s still opportunity to break into the Grand Slam team. Sean O’Brien is back. Tadhg Beirne is a serious contender.

Carbery and James Ryan are only going to improve. Will Addison is effectively the signing of a 26-year-old alternative at fullback or centre.

Everyone will be needed in November and beyond. Look at the crippling injuries visited upon England (see the difference in Farrell to Sexton minutes). Ireland are not going to escape these increased attrition rates. In the Six Nations Bundee Aki kept motoring despite four different centre partners as Garry Ringrose returned from injury to replace Chris Farrell and Keith Earls filled in for Robbie Henshaw.

Key positions will be put under similar strain but Ireland appear to have moved on from 2015. Schmidt seems to have built depth in every position to withstand the loss of a Murray, Sexton, Furlong et al.

Just not all of them. No team can recover from injury ravaging their best players. England have nose-dived without guaranteed gainline success offered by Billy Vunipola and Manu Tuilagi or watch how the All Black struggled against the Lions when Ryan Crotty and Sonny Bill Williams were taken away.

No system can be wrapped up and dependent on any one person, but that man – be it Joe Schmidt, Conor Murray or Johnny Sexton – keeps us coming back for more.