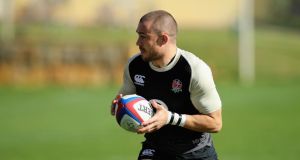 England have dropped Mike Brown for the first time in the Eddie Jones era after he was omitted from a 25-man squad named for Saturday’s clash with South Africa.

Brown has been a virtual ever-present since 2012 and had never previously been left out of Jones’ strongest matchday 23 when fit, appearing in 29 of the Australian head coach’s 31 Tests in charge.

However, the Harlequins full-back will play no part at Twickenham against the Springboks despite impressing when picked on the wing over three Tests against the same opposition during the summer.

Brown’s tenacity and strength in the carry have made him a reliable option for successive England coaches but his exclusion casts doubt over his involvement in next year’s World Cup.

It is a significant selection call and with the 33-year-old out of contention, Elliot Daly is certain to continue at full-back with Jones to choose two wings out of Chris Ashton, Jonny May and Jack Nowell.

If Ashton is chosen he will be making his first international appearance since 2014, with the intervening years notable for falling out of favour, a series of lengthy bans and a one-season spell at Toulon.

Manu Tuilagi made his last start in the same game against New Zealand and is poised to reclaim his place at outside centre, the position the Samoan-born wrecking ball filled with distinction until a savage run of injuries struck.

Offering the potential of a shock-and-awe selection in midfield is the retention of Ben Te’o alongside Tuilagi, with Jones scheduled to name his starting XV on Thursday morning when two players will be culled from the 25.

Te’o has also been plagued by injury, limited to one appearance this season by thigh and calf problems, but has done enough at the squad’s Portugal training camp to remain in England’s plans.

Permutations also abound in the pack, even allowing for the unexpected departure of Ben Morgan and Michael Rhodes.

Zach Mercer could win his first cap at number eight, although Brad Shields and Mark Wilson can also play in the position that was expected to be filled by Morgan.

There is also scope for Maro Itoje to play at blindside flanker as lock George Kruis, Charlie Ewels and Elliott Stooke are included in the 25.

England’s options in the second row have been thinned by confirmation that Courtney Lawes will miss the first of four Quilter Internationals because of a lower back injury sustained on club duty earlier in the month.

Lawes returned home for treatment on Friday and having arrived back in the Algarve on Monday evening, he was subsequently ruled out. It is hoped he will return to face New Zealand on November 10th.

One player who will not be making his debut this weekend is Rhodes, the South African-born blindside flanker who was pushing hard for a place in the 23.

Rhodes qualifies for England on residency grounds and has impressed in his three years at Saracens, but the 30-year-old must wait at least another week to win his first cap.

“Michael returning him is purely a selection decision,” Borthwick said.

“In that back five we have got a lot of really good players. Michael is an excellent player and has showed that over the last few years.”