Gordon D'Arcy: Why did Freddie Burns feel the urge to showboat?

Most success is built on failure, this error might prove a catalyst for something special 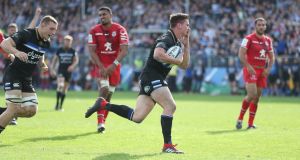 Bath’s Freddie Burns runs behind the posts but fails to ground the ball to score during the European Champions Cup game against Toulouse. Photograph: David Davies/PA Wire

Showboating, I know something of this idiotic art-form. Truth be told, such antics very nearly wrote my sporting epitaph.

The Freddie Burns gift for Toulouse at The Rec last Saturday got me thinking of a blue-haired pup strolling into the Llanelli dead ball area way back when. I outdid myself; oval ball rolling before me, flicked it up, high into the airless night’s sky, before finger-tipping ball back to earth.

All the while thinking this was acceptable behaviour for a prolific try scorer, and it kind of was, until the tries dried up.

One of two differences to Burns was he got sussed by Maxime Medard while I escaped a useful lesson. Granted, our head coach at the time definitely wanted to punch me in the face (Mike Ruddock gets another mention this week). I was informed as much afterwards by a friendly arm over the shoulder – a more interesting chat would have followed if I’d been pick pocketed. Thankfully, somebody at Leinster always took time to impart wisdom as I strolled around training at Old Belvo.

The second difference? I was 18. By 28 years of age that behaviour was erased and in its place a back catalogue of performances, if not quite the medals but they were coming, to prove it.

You see, Leinster by 2006 – when we won on that fine day in Toulouse – was already showing signs of lasting change.

Munster slowed our march a few weeks later, but we eventually found the winners’ podium, and the organisation that exists today grew roots from that harsh lesson.

But on a sunny April afternoon in 2006 we traded blows with the greatest club team ever assembled. See their backline and laugh out loud: Poitrenaud, Clerc, Jauzion, Fritz, Heymans, Michalak, Elissalde.

Insanely gifted, here were the champions of Europe, with Trevor Brennan in the row beside Fabien Pelous, hosting Leinster at their municipal bear pit.

They were throwing it about, clearly intent on putting another 50 plus points on us (like they did a few years before). We won fair and square.

They would recover to capture a fourth title in 2010, at our expense in the semis, but this was Toulouse in all their might and glory.

Visiting Toulouse is an altogether new experience. Think of a footballer entering Camp Nou, or hurling at Semple Stadium

We needed to prove to ourselves more than anyone else that they were beatable. It required 41 points and one of the best tries I’ve ever played a (very small) part in. One minute thirty seconds of ball in play, 12 years ago, was a life time in rugby terms.

They had us by the throat. We still led 26-21 with 58 minutes clocked but pin-ball madness led to another Freddie (Michalak) flinging a pass to Yannick Jauzion which presented Shane Horgan, facing a three on one, with an almost impossible decision.

Shane somehow broke up the play and Girv Dempsey dived on the ball, Will Green cleaned the ruck and, suddenly, there was space on the far side. Malcolm O’Kelly was tuned to our attacking wavelength, his long arm signalling for the wide pass before he, uncharacteristically, refrained from entering this particular race. Our Argentinean medical student took off ten metres from Leinster’s try line . . .

I used to love playing with Denis and Shaggy. Their unpredictability made those years a joy – the trick was to expect the sensational and react before the opposition.

Add Contepomi, I was still trying to understand centre play and he made sure I was always learning. Imagine being coached by such a rugby mind, nowadays, at modern Leinster?

On Sunday they return to this wonderful city, the aristocratic home of French rugby. What a test for these young champions.

Now, the team has suffered recent defeats in Montpellier and Toulon but visiting Toulouse is an altogether new experience. Think of a footballer entering Camp Nou, or hurling at Semple Stadium.

. . . Contepomi found our natural sprinter on the far side. Denis looked up and saw Pelous, the six foot six Toulouse captain, stranded in open field. I was blowing hard, after Cameron Jowitt had saved my hide with a last ditch tackle on Yannick Nyanga, but understood the need to somehow stay with Hickie as he burned past Pelous.

Vincent Clerc – facing Denis, myself and Felipe – was jockeying like a soccer right back but we managed to finish it off. Only just. No room for air kissing or jersey touching in that moment. The margin for error to beat the European champions should be paper thin.

How did we beat them? We all grew up watching Ntamack’s Toulouse tear teams asunder, some of us while on the same pitch, and we saw their unmistakable bond, we saw how they played for each other. They lived the club as children and it was home.

Most success is built on failure. Munster gave us that lesson. Maybe Bath can adopt this attitude to restore themselves to former glory.

Their new attack coach, Girvan Dempsey, will be able to assist in any cultural renaissance.

Medard’s wrist flick keeps Toulouse interested this weekend but poor Freddie Burns. Seriously, how can you not feel for the fella? But that messy ending at The Rec of all places exposes a deeper malaise.

Any and all team cultures need constant care. Players play for a coach as much as each other

The recent open letter by Bath chief executive Tarquin McDonald about current director of rugby Todd Blackadder’s one season extension to facilitate Stuart Hooper’s growth into the role was bizarre. I’m sure the plan felt sound and worth announcing, but sport is unforgiving and it appears to be unravelling.

Any and all team cultures need constant care. Players play for a coach as much as each other. Last thing a team wants is players to start playing for themselves.

Could Toulouse in 2006 have been a sliding doors moment for Leinster?

Had we lost that day, had Shane not cut off Jauzion, had Clerc tackled Denis into touch, had Felipe not instinctively attacked or Jowitt missed Nyanga’s boot laces would that same group of players have stayed together? Would we have given this young, gruff Australian coach a second season?

We needed to win a game that mattered. We needed to cross the Toulousain Rubicon in order to discover just how far ahead of us Munster actually were – exactly three years as it turned out – and to galvanise people who live in the province into believing in the blue jersey rather than my long removed blue streaks.

Going back in time, pre-Toulouse, there was an honest feedback session when one of my peers handed over free advice: “There is more to being a rugby player than getting paid.”

It’s about how you carry yourself. It’s about where you find yourself at 3am on a Saturday night. You can swan dive, blow kisses, run one-handed and be forever remembered for the gaffe that is guaranteed to come or you can place the ball with care and be remembered for the gliding step that gave your team a famous victory.

I understand the mindset of a showboat. It’s about having fun. The arm over my shoulder was needed more than once because people cared and felt those quiet words worth imparting. I was unreliable and like most people who are seen that way I had no idea.

After three long, serious years I began altering perceptions. It usually comes full circle. As my thirties ticked away I tried filling the senior role with young players, simple advice with honest intentions. For some lads it was just noise.

All the talent in the world does not guarantee a long career. Most stumble over early adversity and never rise up. The weight of expectation can be crushing. Sometimes there is nothing to be done.

Nobody needs to rub salt in the wound but perhaps ask him why he did it?

It’s the player who refuses to be sated by success who makes it, and keeps coming back for more. Obsession is a prerequisite for high achievement.

What Freddie Burns did has the potential to be flipped into a positive, not only for the player but for his club. I would love to hear in a few months that one or two players had a chat with him.

Nobody needs to rub salt in the wound but perhaps ask him why he did it?

Could be as simple as relief after missing the earlier penalty. Give him time to reflect and take responsibility for his actions. That might prove a catalyst for something special, even turn him into a more vocal leader in the group.

Or, he makes a half-hearted apology on Twitter without really understanding why. Sorry I celebrated. That wasn’t the issue. The issue was not being focused on the primary role of scoring the try.

The coach tells him it’s okay, even though it isn’t, so nothing changes except the player loses confidence. Invite him to take ownership and who knows what can happen.

Gaps appear in a successful culture all the time and it’s a good reminder that no team is perfect. Ireland will probably experience the lessons the All Blacks learned from playing South Africa. It’s about how you deal with your failings.

Showboating, do it when the medals are at home. I guarantee the urge will have passed.