Gerry Thornley: All at sea without the regular rhythms of the rugby week 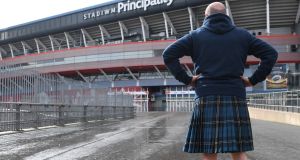 A Scotland fan outside a deserted Principality Stadium in Cardiff after the Six Nations game between Wales and Scotland was postponed. Photograph: Stu Forster/Getty Images

Way, way back in simpler times, my cousin – then around 12-years-old and with the typically inquiring mind of a boy of that age – asked his mother in all seriousness: “When is Gerry going to get a real job?”

Out of the mouths of babes and all that, and rarely has the question seemed more legitimate. Indeed, rarely has rugby in particular and sport in general appeared to be more of a magnificent irrelevance.

In point of fact, while it is not important compared to the coronavirus pandemic, in its indefinite absence, sport’s relevance will be demonstrated like never before.

For many of us, although the signals from China and Italy especially had been undeniably grim, it was when the Ireland-Italy game was postponed at the behest of the HSE and the Government that it began to dawn that things were about to change.

That was re-affirmed by the inevitable postponement of the France-Ireland game last Monday. If the lockdown on all sports didn’t ram home the message that we really were in the grip of a global crisis, then the closing of all pubs certainly did – sports and pubs, of course, having an almost umbilical connection.

In the foreboding atmosphere of last Sunday afternoon it was nothing like the last days, or parties, of the Roman Empire (unlike, it appears, Temple Bar last Saturday night). Rather, by contrast, there was something eerily quiet about a pub without any of its screens beaming out pictures of some sporting event and also booming out its commentary.

Way, way back – even further back – time was when televisions in pubs were considered intrusive by those who went there purely to interact, before they became universally the norm and almost entirely for the purposes of sport. So it was that sport became an even more integral of our lives, almost subconsciously as well as consciously.

Rugby matches, whether attending them live or in pubs that relayed them off terrestrial and pay-per-view tv, were also as convivial a coming together of supporters – even of rival teams – as any sport out there.

That, of course, recently became part of its danger. However, while postponing the Ireland-Italy game now seems especially prescient, even at the time it seemed curious not to also suspend flights to and from Italy around that weekend given the estimated 2,500 Azzurri fans with tickets were always likely to travel to Dublin anyway.

In truth, it was only last Thursday and Friday, as the domino effect saw the Irish season, Pro14 and Top 14 all suspended – that finally rammed the message home that life as we knew it had changed. There’s no shame in that. Rugby, other specific sports or sport in general, provide much of our weekly routines, be it coaches, players, supporters or journalists.

Typically, for those of us in the latter category, the days earlier in the week were set aside for press conferences and the like, before the weekends provided the coup de grace, the matches.

Ironically, as journalists, while there’s a rivalry there’s also a camaraderie, as much with rival publications as one’s own. Now you wonder how they’re getting on without the rugby week.

Last Saturday morning, instead of waking up in Paris with a long day ahead before the scheduled, if uncivilized, 9pm kick-off, we woke up in our homes with no match to complete the week. There were some live Super Rugby matches on Sky Sports, but it was impossible to feel remotely interested. In any event, it too will surely follow into enforced hibernation.

While re-scheduling four postponed games in this year’s Six Nations may ultimately be feasible, the consequences of the rugby season being suspended into the late summer, or the autumn or even next year, are almost impossible to quantify.

For example, were the world to remain gripped in this coronavirus pandemic for so long that the 2019-20 season could not be completed before next season is due to start, or even in this calendar year, what to do?

Do the tournament organisers declare the Pro14, Premiership Rugby and the Top 14 null and void, or at any rate leave their seasons incomplete and declare whoever is currently atop the table as champions?

This would not even be possible for the Pro 14 as their tournament is divided into two conferences, although there is no promotion and relegation. The latter would present problems for the Top 14, if less so for the Premiership given Saracens have already been relegated.

In France, there is already talk of extending the 2020-21 French Championship from 14 to 15 clubs, with the current leaders of the ProD2, Colomiers, being promoted. But as they lead Perpignan by a solitary point, with seven rounds remaining, even that is not entirely fair.

However, establishing the make-up of a putative 2020-21 Heineken Champions Cup would be particularly problematic. While the top six in the Premiership and Top 14, along with the top three in each Conference of the Pro14, could claim the first 18 spots if the current standings were applied, the 19th place would normally be the winner of a playoff between the two fourth-placed sides in the Pro 14 conference tables. The 20th would be reserved for either the Heineken Cup or Challenge Cup winners or losing finalists or, failing that, a playoff between the Challenge Cup semi-finalists.

Given all of this, it might be preferable to somehow complete the 2019-20 season, even if that dragged into next year.

However, such problems would be welcomed by all and sundry because, as with all other sports, we’re going to miss rugby terribly while it’s gone and – as a barometer of the world’s eventual well-being – happily embrace when it returns.

But, for the time being, it’s all over, and the void will be enormous. The rugby schedule shaped our days, our week, our lives. It provided clarity, a sense of purpose and, heck, for some of us even a real job.

1 Munster braced for worst of financial crisis due to Thomond Park debt
2 Seán Moran: Horan’s cautious approach under growing pressure
3 From history to food: Players take chance to focus on life after rugby
4 When the action stops, sports photographers think outside the box
5 Gerry Thornley: Home and away Six Nations could be its ruination
Real news has value SUBSCRIBE