Garrett Fitzgerald steps down as CEO of Munster 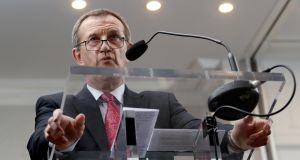 Munster Rugby’s Chief Executive Officer Garrett Fitzgerald will step away from the role he has held since 1999 in June on reaching the age of retirement. He is the longest serving CEO in Irish rugby.

His 20-year tenure coincided with some of the most successful times in Munster rugby the highpoints of which were arguably the Heineken Cup triumphs in 2006 and 2008, while he also oversaw the redevelopment of Thomond Park, Musgrave Park and the move to a single training base at the High Performance Centre in the University of Limerick.

On confirming his retirement Garrett Fitzgerald said, “I look back on my time in Munster Rugby with the fondest of memories. I have experienced fantastic days, working with great people in a unique environment, and for this I am very grateful.

“I would like to thank my wife Áine and family, without their support over the past 20 years none of this would have been possible.”

IRFU Chief Executive Philip Browne said: “Everyone in Irish rugby will join me in thanking Garrett for the many years of service he has given to the game, and to wish him well in retirement.

“Since his appointment in 1999 Garrett has transformed Munster Rugby. He has succeeded in keeping the very best of the amateur era and ethos at the club, while building it into a professional sports club that is the envy of many throughout the rugby world.”

Philip Quinn will continue in his role as acting CEO while Munster Rugby and the IRFU begin the recruitment process in appointing Fitzgerald’s successor.

1 David Clifford sends everyone back to their corners unbeaten
2 Six Nations: A 21st-century tournament that saw Irish rugby come of age
3 Six Nations: Ireland are contenders but England still the team to beat
4 Sublime 67 leaves Rory McIlroy right in the mix at Torrey Pines
5 Limerick roar from behind to sink Tipp and start league in style
Real news has value SUBSCRIBE