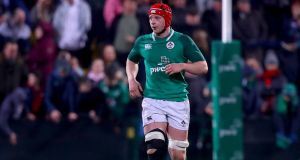 Martin Moloney will miss the Under-20 World Championships in Argentina due to a knee injury. Photograph: Oisín Keniry/Inpho

The Ireland under-20 squad has lost a further two players to injury ahead of the Junior Rugby World Championship in Argentina. Flanker Martin Moloney (knee) and secondrow Brian Deeny (ankle ligaments) have both been forced to withdraw, joining captain, David Hawkshaw (knee), Harry Byrne (hip), Scott Penny (shoulder) and Conor Phillips (knee) on the sidelines.

Moloney, who started every match at blindside flanker during Ireland’s Six Nations Grand Slam triumph, has failed to recover from a knee issue. He is replaced in the squad by Ireland under-19 international Ciarán Booth from the Sale Sharks. Clontarf secondrow Deeny sustained ankle ligament damage in training and is replaced by another Irish U-19, Waterford’s Thomas Ahern.

Prop Callum Reid, outhalf Bruce Houston and centre Adam LaGrue drop out of the original squad but will be part of a group of players placed on standby in case of injury. The squad includes three scrumhalves and three hookers.