England v Ireland: Flights, tickets and all you need to know 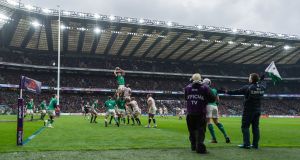 Seeing Ireland play England at Twickenham is usually only possible every two years in the Six Nations, when ticket prices go through the roof and the tickets themselves are as scarce as hen’s teeth.

But this year there’s a rare chance to tick that box off the list without breaking the bank. On August 24th Joe Schmidt’s team will take on England in London as part of their warm-up for the Rugby World Cup. Fancy making the trip over? Here’s all you need to know.

There are a multitude of options when it comes from flying to London from Ireland.

Most convenient: Heathrow, just six miles away, is the nearest airport to Twickenham and is serviced from Dublin by both British Airways and Aer Lingus. With the game kicking off at 3pm, the timing is perfect for a daytrip, and it’s quite affordable as well. At the time of printing, you can fly from Dublin to Heathrow at 7.30am on the morning of the match and back at 8.35pm that evening with British Airways for €98. Similar timed flights (leaving at 7.30am, returning at 9.10pm) are available with Aer Lingus but are currently priced at €164.

Cheapest: Ryanair fly into both Gatwick and also Stansted, but the latter is 50 miles from Twickenham. While Gatwick isn’t nearly as convenient as Heathrow, it is only 30 miles away, and Twickenham can be easily reached from there via London’s excellent public transport. On the morning of the match you can fly Ryanair to Gatwick at 7.35am and back that evening at 9.35pm for just €50.

If you plan to make a weekend of it, prices for flights are very similar going out on Friday and back on Sunday. It’s also worth checking flights into one airport and out of another. Flying into Stansted or Gatwick might make sense, but if you’re flying home straight after the game it’s far easier to just jump on the bus to Heathrow.

Getting to the ground

From Heathrow: The easiest way to get to Twickenham from Heathrow is to take the 490 bus which leaves outside Terminal 4. It will only set you back a couple of quid and takes about 40 minutes. Alternatively, you can get the 285 bus from the airport’s central station to Feltham. From there you take the train to Twickenham station and it’s a 10-minute walk to the ground.

For games with an attendance of over 35,000 (which the Ireland match almost certainly will be) there are RFU shuttle buses from Richmond Station and Hounslow East Station to the ground. It costs £3 going to the game and is free coming back.

While this is only a friendly fixture, any game between England and Ireland is sure to attract attention. However, there are still plenty of tickets on sale via the RFU website. Prices range from £25 for a category 4 upper tier ticket to £80 for a category 1 lower tier ticket.

Bryson DeChambeau has Majors on his mind as he defends in Dubai 16:16
Jack Byrne has Euro 2020 ambitions but Rovers come first 16:08
Saracens say they want full salary cap report to be published 15:44
Edinson Cavani likely to choose Atlético over Chelsea 14:48
Marcus Rashford expects to be fit to help United ‘claim top 4’ 14:39
Here is your handy guide to sport on television this week