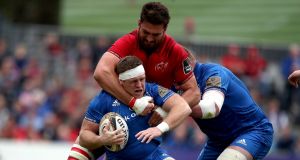 It is a testimony to the relatively settled nature of the Irish squad that the 44 players named for the World Cup preparatory camps which commence in mid-June and the four warm-up games in August and September follow along largely predictable lines. The dogs in O’Connell Street would have guessed 40-plus of them.

Scanning through the names, the most eye-catching inclusions are undoubtedly the non-capped Munster duo of Jean Kleyn and Mike Haley.

The 25-year-old, South African-born and reared Kleyn has made no secret, refreshingly, of his desire to play for Ireland since his arrival in Munster at the start of the 2016-17 season.

“If the time comes, and I do get the call-up because I’m playing well for Munster then I’d like to play,” he said, midway through this three-year journey. “Everybody wants to play international rugby and, if I could get that opportunity, I’d grab it with both hands.”

Although a broken wrist cut short his first season in February of that campaign, Kleyn has played 63 times for Munster in the last three seasons, establishing himself as a regular starter in their Champions Cup line-ups with his set-piece skills, high work-rate and abrasiveness.

He has scored nine tries for Munster, whereas in 42 games for Western Province and the Stormers he only scored one try. While attributing this in large part to the work of his team-mates, Kleyn admitted in these pages in January last year: “I know my skill-set has probably doubled since I’ve come over here, just because there’s more focus on skills-based play.”

Nonetheless Kleyn will have a battle on his hands to force his way into the final World Cup squad, when the six locks named in this expanded squad will be trimmed to four or, at a push, five.

James Ryan, Devin Toner, Iain Henderson and Tadhg Beirne look the likeliest quartet, with Ultan Dillane also in contention ahead of his Connacht team-mate Quinn Roux, who is perhaps the most notable omission.

The 28-year-old South African-born lock had been named in Ireland’s last three squads. Since making his debut against the Springboks in June 2016, Roux has won a dozen caps, and played four times in this year’s Six Nations, starting the wins over Scotland and Italy.

The 24-year-old Haley is a more surprising inclusion given he is eligible through his Kerry grandmother, yet despite joining Munster at the start of the season hadn’t figured in either the November or Six Nations squads.

After a difficult day under the high ball against Saracens in the Champions Cup semi-final in Coventry, Haley did not enjoy a particularly strong end to the season, but he is a skilful player and has cemented the number 15 jersey with Munster, starting 26 games this season.

Haley has been picked ahead of the injured Will Addison, who is expected to return from pre-season after back surgery and the versatile Ulster player may be one of the players Joe Schmidt had in mind when commenting: “Some players have missed out through injury and there are one or two guys that may be added into the squad at a later stage.”

Dave Kearney is also named whereas Darren Sweetnam misses out among the seven outside backs, even though the most recent of his three caps since the last World Cup was against Fiji in November 2017. He hasn’t featured in an Irish squad since, but Schmidt has always been an admirer and he also covers across the back three.

Despite the disappointing loss of both Seán O’Brien and Dan Leavy through injury, the squad still contains seven loose forwards, which is liable to be trimmed to five in the 31-man World Cup squad.

In that duo’s absence, another injury afflicted openside, Tommy O’Donnell, has been named in an Irish squad for the first time since November 2017, having won the last of his dozen caps in the 2016 Six Nations win over Scotland at the Aviva Stadium. His Munster team-mate Jack O’Donoghue misses out.

There were no surprises in the four outhalves named, although they are also liable to be reduced by one or two given the restrictive nature of a 31-man squad may again sway Schmidt and his assistant coaches to restrict themselves to five halfbacks, as they did four years ago.

In midfield, Rory Scannell is one of five centres chosen ahead of Ulster player of the year Stuart McCloskey and Connacht’s uncapped Tom Farrell.

The inclusion of Kleyn and Haley swells Munster’s contribution to 15, just two behind Leinster, the customary bulk suppliers. Leinster would no doubt also point to six of their products lining up with other provinces. Ulster provide seven players and Connacht five.

The game’s attrition rate, as well as the passage of time, means only 13 of the 2015 World Cup squad, along with late call-up Rhys Ruddock, are part of this 44.