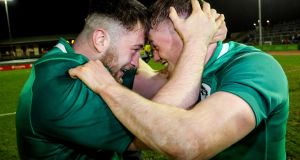 Dylan Tierney-Martin chuckled when he recounted how it took a fair amount of wheedling or cajoling over a protracted period to transform his attitude to rugby.

He hated the sport as a child, didn’t like the contact aspect, but his father encouraged the weekend pilgrimages to Corinthians RFC. One day something clicked and he hasn’t looked back.

Four tries in five matches during the Ireland Under-20’s Six Nations Grand Slam-winning campaign underlines his importance to the team, a responsibility he now takes to Argentina as the squad go in search of the World Junior Rugby Championship title.

New tournament, fresh aspirations and for the 19-year-old hooker a reunion with a group of players he describes as a “brotherhood”.

The IRFU player management programme was stringent in monitoring match minutes post Six Nations for the extended squad ahead of a tournament in which players could play five matches in 18 days.

It wasn’t easy at times for Tierney-Martin as he watched Corinthians narrowly avoid relegation from the All Ireland League Division 2B. He wanted to be out there but he understood why he wasn’t; it was for his benefit.

“In my case I had played the five games in the Six Nations so it was just about trying to keep the game load down and just get back into full fitness again because those five games so close together you lose a lot of muscle mass and stuff like that. So it’s just about getting back to that point.

“As a squad, what we have done is done. We are just looking ahead to England, that first game, and not looking at anything else. Every tournament everywhere is momentum.

“When you have games close together it is quite easy to move on to the next one when you are winning. It can be very tough when you’re not.”

Tierney-Martin explained that their review of matches in the Six Nations has been focused on picking holes in performances and ascertaining where opponents are likely to go after Ireland.

“We are trying to plug those holes.

“I think we finished up with the least amount of tries conceded so we want to push that forward again and keep that defensive record intact. At U20s it is always a fast and open game and if we can stop teams from scoring tries then it can obviously benefit you.”

Ireland, despite fielding a smaller pack than their opponents in the Six Nations, had a 100 per cent success rate. It provided a platform for the team’s attacking patterns and one or two outstanding moments in defence. The hooker paid tribute to his two props, Josh Wycherley and Thomas Clarkson and outlined the principles they’ll once again take into next Tuesday’s opening game against England in Santa Fe.

“You can say that their [England pack] weight is their strength but then they have had that extra exposure to a higher level as well because there are a lot more clubs in England and everything at set piece, especially the scrum, is about experience and technique more or less. So when you go up against lads who have played against seasoned pros and internationals it is quite an advantage for them.

“Thomas Clarkson and Josh Wycherley did an incredible job. Ambrose Conboy [Ireland U-20s forwards’ coach] had us incredibly well drilled on what we needed to do to England, to get them low and what not; just to nullify that extra experience and that extra weight that they have.

“As an eight, when you are a unified group then the individual experience doesn’t matter. We talked a lot about that; eight as one.”

Injury will deny Ireland the presence of some key players in Argentina but while Tierney-Martin acknowledged “it’s hugely disappointing to lose members of the squad who are really valued to us” he concluded by pointing out “we trust the lads coming in 100 per cent to do the role as best they can”.