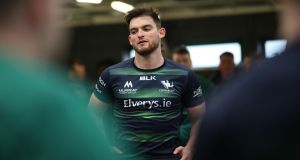 Tom Daly, the Connacht centre, is doing physiotherapy. “For me that and S&C makes massive sense, because it also adds to you as a rugby player. You’ll understand your body more.” Connacht Rugby Squad Training, Sportsground, Galway 25/2/2020Tom DalyMandatory Credit ©INPHO/James Crombie

The coronavirus pandemic and indefinite cessation of all rugby was a reminder, were it needed, as to how fleeting and uncertain a playing career can be.

Never more than a significant injury away from retirement anyway, the signs are that players have used this unwanted time-out from the game to better ready themselves for life after rugby.

“It’s been a positive break for them as athletes in many ways,” says Dave McHugh, the former Operations Manager with Leinster and founder of Line Up Sports, a sports marketing agency which works with many front line Irish players.

“Like James Ryan said, it allowed him to get through all his college work and Josh [van der Flier] the same. A lot of players are reading more. There’s been a lot of personal development, a lot of reflecting time and then obviously it’s been good from a physiology perspective as well.”

Upskilling in other ways, developing qualifications and interests will also help to make a player a better fit with a sponsor or brand, and McHugh also believes the high profile of sports stars will not be diminished by the pandemic.

While plenty of brands have been affected by the pandemic and in many instance they won’t have the same capacity to spend money on sponsorship, McHugh counters: “There has been so much research that says sponsorship delivers on behalf of brands. So it will wobble but the presence of key sports influencers will not diminish, it will just change, I think.”

Developing their qualifications, interests, off-field skills and public profile will also give them more credibility in sectors that they’re interested in and hence, adds McHugh make them “far more valuable to a brand than somebody who just wears a jersey and performs week-in, week-out, and that goes across any sport”.

He cites the example of Conor Murray’s passion for food and how that might make him a good fit for some brands which in turn might also lead to a future career.

“It comes back to the All Blacks’ principle – good people make great players. My philosophy is you’ve got to look ten years forward and then look back. If your rugby playing career is going to last, on average, eight years, the reality – no matter how good you are – is that you’re probably going to have to work for 30 years after your retirement date.

“So it’s so important that you find things that you’re interested in, that you’re good at and might be potential future careers, because you’re going to have to spend a much larger proportion of your life working than you are playing professional sport.”

In nearly all instances too players will effectively have to reinvent themselves. Media work is a popular choice, but as McHugh says: “There’s probably only one or two that come out of every generation who generate a level of wealth from the media that allows them not to have to worry about money.”

“Most ex-players dip in and out of it as a way to stay connected to the sport that they love and it’s a way to keep their brand profile out there.”

Niall Woods, the former Irish international and CEO of what is now Rugby Players Ireland, who now runs one of the biggest sports agencies in the country in Navy Blue Sports concurs.

“There may be a perception that working in the media pays well, but as you well know it does not pay well,” says Woods, chuckling. “It may pay Brian O’Driscoll and Keith Wood well, and one or two others, but that’s about it. A media career is something to tag onto something else. It’s also very uncertain, especially in the current climate.”

Another popular post-playing route is coaching.

“Coaching is very transient,” says Woods, “because you have to be prepared to move club or country, and generally coaches start off in their early 30s when they could have young families.”

The more a player invests in his future during his career then the more beneficial it will be, both in the shorter-term and the longer term

“There are only four full-time set-ups in Ireland, where there’s a penchant for overseas coaches, whereas in France there is the Top 14 and another 16 in the ProD2.”

One of his clients, James Coughlan, had coaching in mind when earning his badges during his last three years of playing with Pau before overseeing Pau’s academy. He is now an assistant coach at Aix in the ProD2.

Woods also agrees that this has been a largely beneficial time for his retinue of players who, akin to Jordi Murphy when suffering his knee injury against the All Black in 2016, have done extra modules without having to cram them.

“Most of them know they have a long career after rugby but they have a tendency to leave it off,” adds Woods, albeit understandably so. The four or five weeks’ off-season are for badly-needed rest. As for during the season, Woods says: “Players aren’t training long, long hours any more physically, but the game is way more demanding mentally. And study comes easier for some than others.”

“For me that and S&C makes massive sense, because it also adds to you as a rugby player. You’ll understand your body more.”

Some invest in businesses, to which end both McHugh and Woods, as well as RPI, encourage players to have experienced business mentors.

“The biggest thing rugby players sometimes struggle with after pro rugby is the day-to-day and organising themselves. They’ve come from school to the academy and pro game, which can be worse – they’re told what to eat and when to sleep. It’s nearly like going into the army to a certain degree,” says Woods. “So it’s been a good time from that point of view, and for players to understand what happens outside of rugby.”

Woods describes the sports’ tax relief as “a buffer” to tide a player over, while the more qualified and prepared players are for retirement, the less of a drop in salary it may mean.

“This is a really big factor for pro players,” says Woods. “They worry about it a lot when they get to the last year or two. If you’re lucky enough to be on 200k you might be dropping to 50k so the more work a player does to decrease that gap the better because if you have no money-related stress your mental health will be in a better shape.”

The more a player invests in his future during his career then the more beneficial it will be, both in the shorter-term and the longer term. During this most uncertain of times, many seem to have appreciated that.