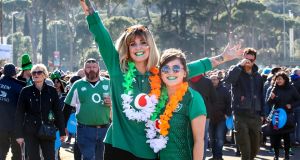 Regrets, the Six Nations will have a few. For starters, if they had agreed to complete the sponsorship deal believed to have been negotiated by their former chief executive John Feehan, the Six Nations would probably have been better off than they are today.

But that’s a mere pittance to other what-might-have-beens.

If the pandemic had come a few weeks later than it did the four outstanding games in the 2020 Guinness Six Nations (including Ireland v Italy and France v Ireland) would have been completed and in addition to the €15 to €20 million which the four capacity crowds would have generated for the respective four home unions and federations, it would also have meant the tournament would have been completed and the €16.7 million prize fund could be shared out.

Furthermore, had the Six Nations moved sooner or the pandemic hit later, the unions and federations might also have completed the sale of 14 per cent of their shareholding in the tournament to the private equity company CVC.

All of this, of course, underlines how the Six Nations is the golden goose of the game in the northern hemisphere

Indeed, with a little more time, the Six Nations might also have completed a lucrative new broadcasting deal to replace the existing television contracts with BBC, ITV and others, which are reckoned to be worth €95 million, expires in 2022 (and with French TV in 2023).

Swelled by the likely inclusion of some element of pay-per-view, as with CVC’s investment, figures of £300 million (€334.65 million) had been bandied about.

What’s more, for the first time ever, the rights for the Six Nations were being sold in conjunction with the November Tests (the IRFU had already agreed their deals with Channel 4 and RTÉ), but the others - which included England’s attractive meeting with the All Blacks - had not been.

All of this, of course, underlines how the Six Nations is the golden goose of the game in the northern hemisphere and why the six unions and federations desperately need some kind of income stream before the end of the calendar year, even if – in the probable absence of crowds – this is restricted to broadcasting and sponsorship monies.

In the further expectation that the restrictions on intercontinental travel will prevent the southern hemisphere nations from fulfilling the November Tests, then without tickets to sell all-European/Six Nations Tests could be arranged at relatively short notice.

This could also actually serve to give ‘the six’ a fairly free hand. New broadcasting and sponsorship deals could be reached for a new tournament or series of games. But ‘the six’ would need to tread carefully too. For example, RTÉ have a deal with the IRFU to show the three home games in November, while Virgin Media hold the rights to the Six Nations.

The real value in TV deals is in their longevity. Broadcasting companies look to build their coverage of a tournament over a period of years. Would the Six Nations go back to the existing broadcasters and ask for an additional payment on a pro-rata basis? Would tournament executives be duty bound to go back to Guinness, or would they put the one-off title sponsors out to tender?

As one experienced insider put it: “Which do you piss off? Broadcasters have long memories, and there aren’t too many blue chip sponsors like Guinness out there. This ‘extra’ Six Nations would require delicate hands.”

While an extra Six Nations in 2020 (or home-and-away tournament over the 2020-21 season) has understandable appeal, and need, ‘the six’ might also be better off organising a more unique, one-off tournament. This could even involve Georgia and, say, Romania.

Suddenly making it a home-and-away tournament in the 2020-21 season or shoehorning in an ‘extra’ Six Nations, on top of the four re-arranged games from the 2020 tournament, would provide complications for either the season’s fixture list or, potentially, the biennial itinerary.

Would the end of the year be a repeat of the 2020 fixtures or would the 2021 schedule be brought forward, or how would it work?

Looking further ahead, the Six Nations and Sanzaar are also looking into running their two flagship competitions simultaneously as a means of achieving the oft-mooted global calendar.

Historically, the Six Nations ensures that rugby is sport’s main post-January pick-me-up and commands the kind of attention it might not be guaranteed to achieve in another, more competitive time of the year. Moving the tournament away from its early February to mid-March slot would be a hugely significant change in its own right.

Needs must, of course, and the novelty value of a one-off extra Six Nations might work, but they need to be careful of too much tampering

That really could be too much tampering in its own right. Certainly making it into a home-and-away tournament ultimately could be its ruination. Not alone does it run the risk of being too much of a good thing, but (presuming sell-out crowds are permissible again one day) five away matches would assuredly diminish the numbers of travelling supporters and thus deny the Six Nations one of its unique, and best traits. Nor would doubling the existing number of matches mean doubling your money. It doesn’t work like that.

The Six Nations need only look at the Rugby Championship as a cautionary tale or, even more so, the once almighty Super Rugby. While expansions and reaching into new territory are commendable, both have suffered for the constant tampering. This is particularly true of Super Rugby, where the increased quantity of the tournament has come at the expense of its quality.

Needs must, of course, and the novelty value of a one-off extra Six Nations might work, but they need to be careful of too much tampering. The Six Nations is the golden goose. Add gate receipts and hospitality to broadcasting and sponsorship, and it possibly generates up to €250 million for the six unions and federations. A variation on it without fans before the end of the year could provide some kind of salvation in the wreckage of 2020.

But no need to overcook it.