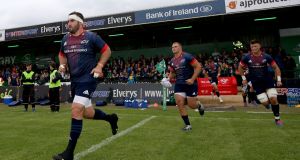 Despite Sport Ireland expressing “extreme frustration” with Munster prop James Cronin’s one month suspension for a doping violation, neither they nor Wada will be appealing the decision to the Court of Arbitration for Sport (CAS).

Following legal advice, Sport Ireland believe a lengthy appeal would at best lead to the ban, which Cronin has already served without missing any rugby, being increased to three months.

“It’s extremely frustrating but not unusual,” said Dr Una May, SI’s anti-doping chief. “It’s quite a common frustration for us in cases where there is a small sanction. A person might be tested in the latter part of a season and their sanction is cleared before the next season starts. Or, in this case, there is no season.

“It has happened multiple times in the past.”

Having reviewed the case file, SI are satisfied the EPCR’s investigation was rigorous despite no direct cross examination of Cronin. The 29-year-old tested positive for prednisolone, a synthetic steroid, and prednisone after the Champions Cup match against Racing 92 at Thomond Park in November 2019.

Cronin, who was prescribed the antibiotic Amoxicillin by Munster team doctor Jamie Kearns, was given Prednesol in error by his regular pharmacy in Cork. He took nine tablets in two dosages the day before and morning of the Racing game.

Antony Davies, the independent judicial officer, stated the doping violation could have been avoided if Dr Kearns and Cronin had better “safeguards” in place and concluded the Ireland international “bears at least some fault.”

“We still consider one month to be lenient,” Dr May told The Irish Times. “We could put up a huge battle to increase it to three months and could be unsuccessful. For the sake of two months it doesn’t appear appropriate to go into that level of work and detail, because there is a comprehensive file attached to this case.

“There was significant follow up. There is an impressive amount of evidence.”

“It could take six months to a year before the case is heard by CAS,” said May. “They are not hearing cases at the moment. Sometimes you have to be sensible about how we approach these things. We are not comfortable with the one month but the rigour in which the case was followed through initially did give us some comfort.

“The player’s story wasn’t just accepted right at the beginning. Although he wasn’t in a face to face cross examination he did respond to multiple queries.

“We also established the EPCR had liaised with Wada and they were comfortable with the ban. That would put us in a difficult position if we are trying to increase the sanction to higher than what the [world] governing body thought was appropriate.”

The IRFU feel the sanction was “sufficient due to strong mitigating circumstances.”

The Pharmaceutical Society of Ireland is investigating the mistake, which led to the wrong “James Cronin” receiving medication (Prednesol) with two substances listed on Wada’s prohibited list. It is believed the packaging did not show an address, which is a requirement by law.

“Last Friday we sought confirmation from the Minister [Shane Ross] to establish a memorandum of understanding with another public body,” explained Dr May. “Should we be in possession of supporting documentation or information that could be of assistance to them, this memo allows us to share information when we might not otherwise have done so.”

Sport Ireland has requested a meeting with Munster and the IRFU.

“We have asked to meet them to discuss the implications of the case and what it means in terms of enhancing the education of players or what would be the next step arising from this.”

Cronin already volunteered to “help raise awareness with other rugby union players so as to ensure that my experiences can be avoided by other athletes.”