The day Irish rugby came together to give peace a chance 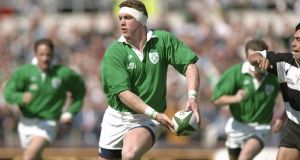 Ireland’s Victor Costello in action during the Peace International against the Barbarians at Lansdowne road in May 1996. Photograph: Clive Mason/Allsport

The Canary Wharf bombing of February 1996 and the ensuing protest marches in protest over the attack which marked the end of the IRA’s 17-month ceasefire prompted the one-time Irish fullback Hugo MacNeill to ring his former teammate Trevor Ringland. It was time to make a stand for peace through rugby.

The international careers of MacNeill, a southern catholic, and Ringland, a northern protestant, had coincided exactly, from 1981 to 1988, and thus took in the Triple Crown of 1982 and Championship/Triple Crown of 1985.

“Myself and Trevor got to know each other and completely trust each other through playing international rugby for Ireland together. We would sit down and talk about Unionism and Nationalism, and the Troubles.

“It wasn’t good enough to say we all played together and yet the Troubles were never mentioned. It was kind of like the elephant in the room, because for most people in the South it never touched them but all for the Northern guys this was day-to-day life. They all had friends or relatives who had been affected by the Troubles.

“Myself and Trevor talked and talked and talked, for years and years, so I got a great understanding of the North though speaking at dinners in Ballymena, Dungannon, Larne, Enniskillen and Belfast. Then, when people started marching after the Canary Wharf bombing I called Trevor and said: ‘I think we should do this’.”

With that the seeds of the Peace International were sewn, namely a match between Ireland and a star-studded Barbarians team which was somehow cobbled together in just six weeks and took place on May 18th, 24 years ago this week, at Lansdowne Road.

All proceeds from the game would go to the Co-Operation North and the Ireland Fund, with whom both MacNeill and Ringland had worked.

The two former team-mates agreed that the person they needed initial approval from was Syd Millar, the former Ballymena, Ulster, Ireland and Lions prop who had coached and managed the Lions, and managed Ireland at the inaugural 1987 World Cup. He was then the IRFU president, but more importantly he was an Ulster legend.

Next came Micky Steele-Bodger, the then chairman of the Barbarians, who also readily agreed to the concept. The first player they needed was Francois Pienaar, who a year before had accepted the William Webb Ellis trophy from Nelson Mandela. Nothing had ever shown rugby to be such a unifying force for a country.

The poster of Pienaar accepting the trophy from Mandela was used around Dublin to promote the game but two weeks beforehand he was injured playing for Transvaal. MacNeill implored him to travel and he duly did so (as did the injured Campese), while in order to replace Pienaar at such short notice, MacNeill contacted Dean Richards.

“This was before Bloodgate and all that stuff. Deano was one of the biggest names in the game and the guy said: ‘Not a problem. I’ll be there’,” recalls MacNeill.

“People talk about England being our old enemy but in rugby they’ve been our greatest friends. Not only did they come in 1973 when no-one else would come,” says MacNeill in reference to England fulfilling their Five Nations fixture in Dublin a year after Scotland and Wales refused to travel. “They are the ones that also voted for our World Cup bid and sent more players to the Peace International than anyone else.”

Ultimately, the Barbarians were represented by a multi-national mix of 10 Englishmen, three Frenchmen, three New Zealanders, a South African and a Welshman.

Instead of pre-match anthems there was a minute’s silence and to emphasise the non-political aspect of the match, save for president Mary Robinson, who paid £20 for her ticket, there were no politicians present for what was also a very poignant occasion.

“The guests of honour were all children who had been affected by the violence. There was a boy called Darren Baird – both his parents and his sister were killed in the Shankill Road bombing,” recalls MacNeill, of the then nine-year-old boy whose parents Evelyn and Bobby (both 27) and sister Michelle (then seven) were among the 10 victims of the IRA attack on Frizzell’s fish shop that October day in 1993.

“There was Tommy Mullan, whose brother (Steven, 20) was killed in a reprisal attack in Greysteel the following week,” adds MacNeill in reference to the Greysteel massacre carried out by the UDA on a Halloween party in Derry in which Steven Mullan (20) was one of seven fatal victims.

“There was another boy called Gareth Bouldsworth, whose best friend, Tim Parry (12-years-old), had been blown up by the IRA bomb in Warrington. These were very young children and it really brought it home. That had a huge impact on people. It was important that it was balanced and we were very careful that it was done in that way.”

The Corrs, whose manager John Hughes was a good friend of Ollie Campbell’s, contacted MacNeill to ask if they could perform before the game on the north terrace.

After the Barbarians won by 70-38, scoring 10 tries to six, their players conducted a lap of the pitch to the backdrop of a standing ovation, which MacNeill describes as “probably the most emotional moment I’ve ever had at Lansdowne Road”.

“These world stars had leant their names to those who were working for peace in Ireland and it was just extraordinarily moving. And it was rugby, as Trevor always said, showing how to do relationships properly on this island and not the wrong way.”

Indeed, as Ringland himself put it at the time: “We don’t want children for the next 27 years having to put up with what I had to put up with – and other people like me.”

MacNeill regrets that he and an equally exhausted Ringland didn’t attend the post-match press conferences.

“I guess you always feel you could do more in telling the story around the match. But it was a very emotional and very satisfying when it was all done and I guess all in all we were pretty pleased with it.”

The attendance was estimated to be around 38,000, and the game raised over £100,000, but as MacNeill says, it was more a statement than a fundraiser.

“It was for people down here who previously mightn’t have said anything or expressed any views, who were just simply coming out in objection to violence, to say that ‘this was not being done in our name’.”

“The great thing about rugby is that it brought people together, and built relationships and trust, without threatening anyone’s sense of identity or allegiance constitutionally. And that’s an incredibly powerful message for the particular time that we’re living in now.”