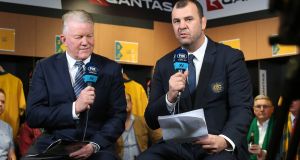 Melbourne-born Samu, who plays for Super Rugby champions Canterbury Crusaders, was excluded from the squad named on Wednesday but Cheika said the untried 26-year-old could be a late addition if released from his New Zealand Rugby contract.

“I’ve been told at this point we can’t select him but there is a spot for him,” Cheika told reporters on a conference call.

“At this point, it’s in others’ hands . . . I’m not really involved in that part of it but I’m hoping there will be some more clarity on that tomorrow.”

In Samu’s absence, Caleb Timu is in line for a maiden test appearance, slotting into a back row alongside David Pocock and captain Michael Hooper.

Blindside flanker Ned Hanigan has been named but will miss at least the first test as he recovers from a knee injury, and Cheika was cagey about his favoured back row combination.

“Whether (Pocock) wears seven, six or eight, he will have his standard floating role,” he said of the veteran ball-poacher.

“So he can do exactly what he does best . . . He’s always straight into his strong points.”

Pocock’s speedy ACT Brumbies team mate Tom Banks has a chance to make his test debut in the outside backs, along with uncapped Melbourne Rebel Jack Maddocks.

With Super Rugby scheduled on the weekend, the Wallabies will have less than a week to prepare for the June 9th opener in Brisbane against the Six Nations champions, who are riding a 12-match winning streak and bidding for their first test and series victory in Australia since 1979.

Complicating matters, the Canberra-based Brumbies have refused a request from Cheika and Rugby Australia to rest three of their Wallabies - Pocock, and props Allan Alaalatoa and Scott Sio - from Sunday’s home match against the Sunwolves.

“Common sense will tell you that a six-day preparation for a test match is not ideal,” Cheika said. “I’m hoping we can work it out together.”

Meanwhile, scrumhalf Will Genia has been named in the squad despite missing a month of Super Rugby with a knee injury.