Australia set to show their cards ahead of Ireland series 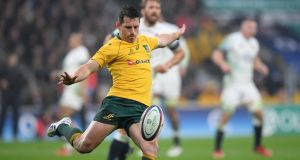 Bernard Foley at number 10 is a certainty for Australia. Photo: Getty Images 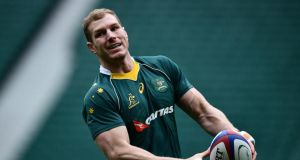 David Pocock’s place in the Australia team is one of the major talking points ahead of their Test series with Ireland. Photo: Getty Images

Clash of cultures. The Australia squad announcement on Fox Sports this morning (10.30am Irish time) allows Joe Schmidt to ignite precise preparations for the first test in Suncorp stadium on Saturday, June 9th.

In stark contrast to how Schmidt conducts media affairs, Wallaby coach Michael Cheika will announce his panel for the three test series against Ireland on live television.

The IRFU prefer the conjecture created by a brief email.

Despite impressive form of late, the sensationally powerful Fijian winger Taqele Naiyaravoro, veteran outhalf Quade Cooper and Leinster hero Scott Fardy are not expected to be recalled by Cheika.

Pete Samu – pending early release by the New Zealand Rugby Union as the backrower switches from the Canterbury Crusaders to ACT Brumbies, and is eligible for selection as he was born in Melbourne – could be the “bolter.”

“Personally I am not a fan of having David Pocock and Michael Hooper in the same side,” said Wallaby legend Tim Horan. “Only because we have lacked size in the backrow for a long time when we have the Pocock and Hooper combination. Me personally, I’d put Pocock on the bench with him coming on for impact with about 30 minutes to go.

“I just think we need to get back to two big backrowers – a number eight and number six who can cart the ball over the advantage line, put some hits on, offload some balls. Who they are, there is a mix of players but I think [Cheika]will pick Pocock and Hooper . . . but I think we are getting out muscled there.

“I’d certainly have [Samu] in the squad to understand the pattern of the team and culture of the squad,” Horan continued, “but Cheika might pick him as a bolter at six or eight.

“The game plan, especially when you play on dry rugby pitches in Australia, you want to play open and expansive style and that suits having Hooper and Pocock, but you still need to lay a platform for the backline and that’s by going forward.”

Not unlike Irish fears over losing Johnny Sexton or Conor Murray to injury, halfback remains the major area of concern for Australia. Will Genia, still only 30, having rejoined the Queensland Reds this season after two years in France, is a certainty at scrumhalf.

“Bernard Foley at 10 picks himself,” said Horan on the Fox Rugby podcast. “If Foley does get injured Kurtley Beale has to move from 12 to 10 so it’s two positional changes.”

Hamish Stewart, the 20-year-old recently named at fullback by Queensland coach Brad Thorn, could feature against Ireland as Thorn refused to include Cooper in his plans, forcing the 70-test outhalf to play club rugby with Souths, where he recently suffered a MCL knee injury.

Naiyaravoro’s inclusion in the 33-man squad is unlikely as the 6ft 5ins, 123kg winger – who has 10 Super Rugby tries for the Waratahs this season – recently signed a deal to join the Northampton Saints.

Despite Fardy’s stunning first campaign in Dublin, at 33 his test match days appear to be over, although Cheika did convince Kane Douglas to seek early release from his Leinster contract to feature at the 2015 World Cup (when Fardy proved the linchpin of the Wallabies march to the final).

The tactical battle between the former Leinster coaches promises to decide this Test series, with the backfield presence of Israel Folau probably forcing Schmidt and Sexton to alter their usual aerial bombardment of opponents.

“[Ireland] will kick to contest a lot,” said Wallaby attack coach Chris Malone. “The big area Australia will be working on, I would imagine, is how they retreat on those kicks. I know [Cheika] will be big on the effort of our team to get back behind the ball in those situations. Particularly with Israel, he’s the best in the world in the air so if they’re going to kick to contest I’ll be backing him to win most of those possessions.”

Meanwhile, Isa Nacewa has ruled out any possibility of coaching (playing) at Leinster or anywhere outside Auckland in the short term.

“This is it,” wrote Nacewa in a farewell letter. “There won’t be a timeout. Time out to recuperate and to rehab and to get the mind and body right before coming back for another go. No. Not this time. This is it. This is goodbye.

“So, why are we leaving? There is a sign in the RDS tunnel as you walk out that signifies what it means to pull on that jersey and it’s the last thing you see before you walk out into the cauldron of brilliant blue. It says Ár mBaile, Ár Muintir which translates as Our Home, Our People. And that’s where we are going. Back to our home and to our people. But we will always remember Ár mBaile, Ár Muintir. Slán go fóil, Isa.”

Former Ireland centre and Ulster coach Mark McCall has extended his contract as Saracens Director of Rugby until 2022. The club regained the English Premiership title last weekend, beating Exeter 27-10 at Twickenham, the fourth since McCall took the position in 2010.