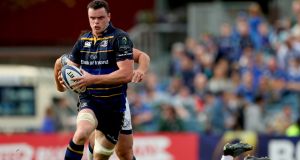 James Ryan: has ticked the boxes at senior level faster than many expected. Photograph: James Crombie/Inpho

Why is he so important: It seems too early in a career to foist superlatives on him but Ryan’s upward curve has been monitored since he captained the Ireland U-20s. Since then he has ticked the boxes at senior level faster than many expected. He is a resilient secondrow with a tough edge to his play. But more than that, the lines he runs and his natural athletic ability give him mobility to add to a sharply functioning football brain. That means doing the right thing at the right time and bringing physical freight to the position that most 21-year-olds could not. As Peter O’Mahony said of him; “he has got that intelligent nous about him and gets stuck in when he is asked to”.

Trivia: He is the “Big Cheese” to Beirne’s Pizza deliveryman. He doesn’t like the Big Cheese nickname because there’s an assumption of arrogance. He used to play number eight in school and was captain of the Ireland U-20 team throughout the 2015–16 season, leading them to their best-ever finish at the 2016 World Rugby U-20 Championship, where they beat New Zealand U-20 for the first time ever and finished runners-up to England U-20.

Why he is so important: We may as well ask why he was named Scarlets’ Players’ Player of the Year and Supporters’ Player of the Year last weekend. Beirne is a poacher supreme and, according to coach Wayne Picvac, he can play in three positions which makes him doubly invaluable. Oh, yes he also scored Scarlets’ try of the season and is the top try-scoring forward in this season’s Pro 14 with seven. But it is at the breakdown poaching ball and forcing turnovers where Beirne thrives and excels. He has won 38 turnovers this season with no other player in the league winning more than 22.  His move to Munster means a first Ireland cap is imminent with few players more deserving.

Trivia: When he was coaching in Blackrock College he also worked as a pizza delivery man for an outlet close to the stadium where he first set out with Leinster in Ballsbridge. In his first week he got a puncture and reversed into a wall. His sister Alannah competed in Britain’s Next Top Model and reached the final, finishing in third place. Last December she was a contestant on the second series of the Irish version Dancing with the Stars’, made a decent break for glory but was floored by a Samba.