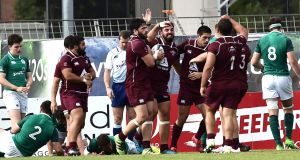 The Georgia team celebrate scoring a try during their win over Ireland at the under-20 World Cup in France. Photo: Inpho

Ireland suffered a third consecutive defeat in the Under-20 World Championship in Narbonne and will now contest ninth to 12th places in their final two matches in the tournament.

Georgia, who had never won a match before in this tournament, were worthy winners on the basis that they snapped up every half chance and ultimately that made the difference on the scoreboard; Ireland were left to rue what might have been for the third straight match.

Ireland simply made too many mistakes, coughing up possession carelessly time and again and crucially failed to capitalise on the opportunities they created. It was a harsh lesson yet again.

They were outplayed at the breakdown and the scrum disintegrated periodically as the game wore on. They had two tries chalked off, correctly, the first for a double movement and the second for a forward pass. It’s a microcosm of the tournament from an Irish perspective.

The Irish side conceded two tries from turnovers in the Georgian 22 and that was hugely debilitating when the game was a contest. Nine handling errors and five turnovers in the first 50-minutes offer a graphic illustration of the malaise, while Georgia scored their first 24 points with just 30 per cent possession.

The outstanding Caelan Doris, ably supported by Diarmuid Barron, Jack Dunne and Hugh O’Sullivan and Tommy O’Brien too before a shoulder injury finished his match, put in a huge shift but the error-rate and crucial lack of precision fundamentally.

Conor Dean kicked a superb long range penalty and the outhalf demonstrated some neat footwork to beat a couple of tacklers and plunge over the line; he hit the post with a conversion. Replacements Cormac Daly and Bryan O’Connor’s late tries just made the frustration of the first 60-minutes all the more acute and won’t provide much of a salve for their battered bodies.