Ireland wrestle victory to wrap up season of success 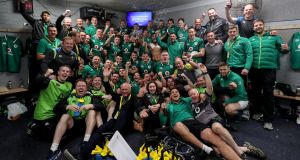 The Ireland players, with head coach Joe Schmidt in the back row, and staff celebrate in the dressing room after Saturday’s win over Australia sealed a first series victory against the Wallabies since 1979. Photograph: Dan Sheridan/Inpho

Ireland finish the northern hemisphere 2017-18 season as the second best side in the world, and now not even the southern hemisphere can dispute that. They may be a bit sniffy towards the Six Nations, but backing up a Grand Slam with a come-from-behind series win in Australia leaves no room for argument.

Michael Cheika and the Australians can whinge all they want about refereeing decisions in Saturday’s third Test, but to recover from losing the opening Test by backing up the Melbourne victory with a series-clinching 20-16 win in Allianz Stadium is a phenomenal achievement.

That it comes at the end of a 10-month season of carefully managed but nonetheless emotionally draining demands makes this first series win in Australia since 1979 even more commendable. In its own right there’s never been a better season for Irish rugby, which of course, leaves only one problem. And Joe Schmidt didn’t even have to be prompted.

There was, in Schmidt’s mind, more than enough evidence that the Wallabies are going to get better, “and we know that other opponents are going to get better as well”. Prior to England winning the third Test in Cape Town, he added: “I’ll be surprised if England don’t bounce back, if not this evening, then certainly in November and then in the Six Nations. They have too much depth and too much quality not to bounce back.

“France, they’ve looked so good in the first half three times against the All Blacks and last week I thought they did an unbelievable job 14 against 15, 26-13, that’s a phenomenal effort. So there’s all sorts of teams who are building and growing their group.

“There were some guys for France in their group who made their debuts on the tour and they’re going to be tough. And Wales worked their way through Argentina. That’s a tough ask and they did a super job of it. So when it rolls round to the Six Nations all bets are off again. We have England at home first up and I think it’s going to be a big, loud crowd for that game.”

Before Ireland’s defence of the Six Nations, there is also a busy November window of games against Italy (in Chicago), Argentina, New Zealand and the USA. This Ireland team have raised the bar for themselves, albeit England’s fall from this near identikit point in Australia two years ago serves as a cautionary tale.

“We have put a couple of things together, good, unusual things – and it is good because it does put a line in the sand, to back things up,” said Schmidt of backing up the Grand Slam with this series win. “We don’t want to be one-hit wonders, but while we have earned where we are tonight, in the scale of things, we want to keep growing.

“It is so fickle, so competitive and I know how quickly it can turn. This time two years ago, England won a Grand Slam and they went one better than us, they won 3-0 here against Australia. Until Saturday’s win, they had lost their previous five Test matches and throw in the Barbarians result there, too. They have had to keep their heads above water. It’s not easy. There are so many good teams out there.”

Clearly agitated by the late arrival of the bus to the ground prior to kick-off, Schmidt stressed “you can’t maintain things. You’ve got to try to get better”. He cited some of the flaws in Saturday’s performance, such as not making more of their first-half dominance, scrum issues and, in the case of Conor Murray conceding a late penalty for offside, having a real clarity of thought in those pressure situations, especially when “we’ve been under the pump for a while as we were in that second half”.

But he vowed not to review the video of the game until at least Wednesday, so that he could enjoy a well-deserved celebration of the season that’s been, and in so doing not spoil any of the players’ enjoyment either. Leinster are already back in pre-season and the players only have four weeks off before going again.

“I am in Wesley College [in Auckland] Sunday morning with Sekope Kepu’s old school. I have a few fundraisers I am doing in Palmerston, incredibly good people who were very good to me, so I will sneak back and get those things done and then sneak back to Dublin and bury myself for a week at least to catch up with my family and I am really looking forward to that.

“It has been a superb series, I have enjoyed the hospitality we have had, Australia is an incredibly tough but enjoyable place to tour. I love 20-degree days, sunny days, when it is mid-winter and I don’t think anyone can complain about that.”

David Pocock, who assumed the Wallabies captaincy early on in the match, admitted it was “an incredibly disappointing loss” but was generous too in defeat.

“Credit to Ireland through the series, they have been tough. Their game management has been really good, you don’t become number two in the world for nothing. It finishes a really good year for them. But, for us, it’s really disappointing with the support we have had.”

Asked if the aggregate score of 55-55 over the three Tests reflected how tight it was, Pocock said: “It’s not how you score the series, but I guess each game has been tough. They’re a good opposition. It’s been a real arm wrestle and it’s not how we wanted it to finish. Certainly in that last 20 we were backing ourselves to finish strong, finish well and didn’t quite get there.”

From Fox Sports to the Wallabies camp, a newfound respect abounded for Ireland.