Felipe Contepomi: Lockdown a double-edged sword for the likes of Johnny Sexton 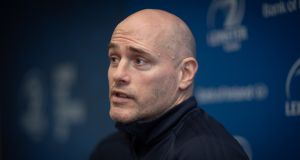 There was a hint of a smile as Felipe Contepomi considered the question before responding: “Don’t always trust the photo shoots. They can make a chimpanzee look nice.”

The Leinster backs’ coach offered a tongue-in-cheek retort as part of an appraisal of Johnny Sexton’s post-lockdown physique.

What has been essentially an enforced three month pre-season due to the coronavirus pandemic - the Leinster squad will enjoy a two-week break from Friday before returning to prepare in earnest for next month’s interprovincial matches - has allowed players to shake off any minor injury niggles but Contepomi was non-committal as to whether the playing sabbatical would help to prolong a career.

He said: “I don’t know if it will extend a career or not. There is no research done on that. With a medical background, I will base a lot of my evidence on research and case studies. Definitely for a short run, for a guy like Johnny, it could be good.

“But it depends how you see it because also for a 34-year old guy, if you are out of the game for three months and you haven’t done your stuff properly, it can take you a long time to get back to where you were.

“It’s a double-edged sword. We didn’t plan for that break but we saw it as a positive thing and I would like to think that we have made the most of that in terms of fitness, not only for the older players but for the young players as well. The guys worked really hard and I’m very proud of them.”

The squad is in rude health as evidenced by assorted testing when reconvened almost a fortnight ago and that includes long-term injury victim Dan Leavy. Contepomi explained: “To be honest, from day one, I’ve never hesitated in [believing that he possessed] the willpower to go through that injury because it’s the way he is.

“The medical staff, from the surgeon to every staff member in Leinster did a great job, working step-by-step to get him to where he is and it was great job from him to have the mental toughness to go through very dark moments; [he is now] nearly there to be able to play. He should be very proud and I feel very proud for him.”

The phrase ‘new normal’ has become a colloquial catch-all but the changing landscape as a result of the pandemic underlines a requirement for players and staff to be flexible, and much like in a match, react positively to changing circumstances.

As a medical doctor, Contepomi fully appreciates the need to adhere to guidelines and protocol for the general wellbeing of all concerned. His first task daily in the morning, “even before I brush my teeth, is to complete a questionnaire on an App to be able to get into training 45 minutes later.

“Then when we get into the training ground, we check our temperature. We take all those protocols very seriously. When we’re there, we definitely don’t have common areas in the building. I just go to training, do all the protocols and training, then go back home and work from home for the rest of the day; all the computer stuff. It’s a different way of working but we need to adapt.”

James Lowe remains in New Zealand for personal reasons but should be reintegrated by the time Leinster face Munster in the Pro14 in late August.

Leinster’s recent announcement concerning 28 new contracts plus virtually a clean bill of health with regard to the playing roster will ensure stiff competition when matches resume. Contepomi had a simple solution to any selection headache. “Take one Paracetamol and it will go away.

“I’d rather that than the headache of not having choices to pick from. There are no places guaranteed, so it’s a great challenge.” He referenced the example of the five young players, Ryan Baird, Harry Byrne, Jack Dunne, Dan Sheehan and Tommy O’Brien who have graduated from the academy to the senior squad to highlight that talent and hard work will continue to be rewarded.

He maintained that Leinster are in no rush to look outside the group and sign a non-Irish qualified player. “It’s not about bringing someone in. You have to bring in the right person. Sometimes it’s hard to find the right person. I would like to have another Isa (Nacewa) and bring him in, but to go and get him is not easy.