What we learned from the Champions Cup weekend 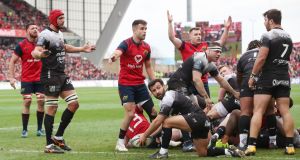 There were a number of issues that arose from what constituted a superb weekend in the Champions Cup for Munster and Leinster with both claiming semi-final places. Perhaps the most contentious was the officiating, that pretty much spanned the four quarter-finals in the tournament.

There was a high entertainment quotient across the matches irrespective of what singular aspect of the sport appeals most, from beautifully crafted tries to thumping tackles, but it wasn’t just the physical as players’ ability to outthink or outmanoeuvre their opponents at the set piece and breakdown was just as eyecatching.

Referee Nigel Owens, his assistants, Ian Davies and Ben Whitehouse and the Television Match Official, Jon Mason presided over Munster’s 20-19 victory over Toulon, a match that required a fair bit of untangling.

There were several disputed officiating decisions and, given the one-point margin at the final whistle, there was going to be a huge element of subjectivity rather than objectivity based on perspective.

Toulon can feel aggrieved that there were not awarded a penalty try in the opening minute. Simon Zebo was adjudged not to have deliberately batted the ball out of play in the in-goal area, because the palm of his had was facing upwards.

He went for the ball one-handed with virtually no chance of gathering it. Zebo gambled and hit pay dirt, when Owens in consultation with Mason interpreted the Munster player’s actions favourably; nine times out of 10, a penalty try would be awarded. Toulon wing Chris Ashton’s post-match interview gave an inkling of their thoughts on the Zebo incident.

If Toulon were miffed then it was their turn to be relieved when Alex Wootton had a try ruled out because replacement Darren Sweetnam’s tap back of a high ball was adjudged to have gone forward. It didn’t and the try should have stood.

The five-minute long discourse between Owens and Mason on the merits of Conor Murray’s try, the scrumhalf sharp of thought and deed, may have instilled a reluctance for referee Owens to delay the game with further reviews. It backfired a tad.

In returning to the Murray try, at one point Owens and Mason both agree that they don’t think that Toulon captain Guilhem Guirado knocked the ball on at the base of the ruck yet they continue to debate the topic for some peculiar reason. It’s not an argument to suggest the decision was wrong just that the dialogue was bizarre, given that they agreed at one point.

Referees should be allowed to watch replays of an incident of a television monitor instead of a pixelated big screen in a stadium, so not to have to undertake two-way conversations that are occasionally lost in translation.

Rugby is not played under laboratory conditions, so to expect perfection or close to it from all participants, players, coaches and officials, is unrealistic and unfair, albeit acknowledging that all those who are professional participants will be accountable to someone to drive standards.

France’s Jerome Garces is one of the best referees in the world, if not the best, and he reinforced that with the manner in which he handled Leinster’s 30-19 victory over Saracens. Rugby is a physical contact sport and Jonathan Sexton came in for a bit of ‘treatment’.

Some of it was borderline, an occupational hazard, but not in the incident involving Richard Wigglesworth. The Saracens scrumhalf jumped shoulder first, without using his arms, and clipped Sexton on the jaw. It appeared reckless rather than malicious.

However if World Rugby are serious about cutting down the instances of brain trauma or concussion in the sport, whatever term is preferred, then players must be responsible in the contact area and that starts with the height of the tackle and the level of control in the act.

The schools rugby system gets more than its share of brickbats, some deserved, but there is no doubt that the younger age at which players are coming through to senior rugby in recent years is a product of a rugby environment that mimics a professional culture and its attention to detail, to a far greater extent than any of the preceding ones.

Teenagers have access to some of the best rugby coaches, strength & conditioning programmes, advice on nutrition, the best medical and physiotherapy support structures and a training regime that apes that of the professional game.

Leaving talent aside for a moment, that adaptive period between schools and senior rugby is minimal, and the result is physically more mature, confident rugby players who are used to success and understand the sacrifices and detail required because for most it’s what they have always known.

The importance of the set piece

Peter O’Mahony offered a tour de force at lineout time in the victory over Toulon, not only in delivering a perfect attacking platform but destabilising the Toulon throw. In a game of millimetres, Munster’s excellence in this facet of the game had a huge influence and in that respect Munster’s lineout tactician Billy Holland deserves great credit.

It was instructive to note that the Irish provinces came off ‘second best’ in the aerial duels at the weekend. Toulon’s Fijian Josua Tuisova and Sean Maitland, the Scotland and Saracens wing, were especially effective in the air, recognising the importance of this aspect of the game to Irish clubs and indeed the national side.

There is probably a correlation between the current form of Munster duo Jack O’Donoghue and Sam Arnold who spent a reasonable amount of time in Ireland camp over the past six months and their consistent excellence for Munster in recent times.

The two were outstanding against Toulon – so too Rory Scannell – and it’ll be interesting to see if Ireland coach Joe Schmidt might take one or more to Australian during the summer. Arnold can play both centre positions and formed a brilliant Ireland U-20 partnership with Garry Ringrose, while O’Donoghue, a number eight, had a fine game at openside flanker.