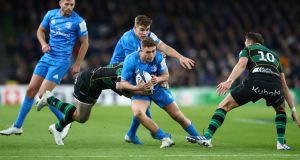 Jordan Larmour: further proof that Ireland should have built their attack around him in 2019 was evident throughout his stunning performance against Northampton. Photograph: Michael Steele/Getty Images)

Some subtle name dropping is required. No need to mention gold standard technical number eights like Kieran Read and Jamie Heaslip – Duane Vermeulen and Billy Vunipola bring an incomparable level of physicality – because James Ryan is who Caelan Doris must aim towards.

No one else. You captain the Ireland under-20s and climb into the Leinster first XV age 21 then, well, Ryan is the man to live your life beside.

Doris is the latest teenage sensation to declare readiness for the road ahead. Hype is unavoidable when a Leinster backrow makes 18 carries for 82 metres, snatching a clever individual try and putting in 16 “hard edge” tackles on bigger men at the Aviva Stadium’s Christmas party.

So, to dampen what can become overwhelming expectation, let’s start with a mild critique of a performance that was so convincing the temptation exists to fast-track Doris into the Ireland team, which would mean CJ Stander returns to blindside as Peter O’Mahony and Josh van der Flier enter an unholy war for the number seven jersey.

On 18 minutes, and Leinster already 17-0 to the good, the Mayo man was penalised 10 metres from his own try line by referee Dan Jones for side entry. Dan Biggar quickly tapped and popped the ball to Andy Symons, whose excellent offload allowed Biggar to dive under the crossbar.

“There are lots of nuts and bolts of forward play [to be critiqued],” said Leo Cullen, who played number eight in a past life. “Little bits but he’s still bloody young. What, 22 [next April]? He brings a good physical edge to his game.”

This is the conundrum; when to slacken the leash, when to hold tight.

Cullen’s Leinster err on the side of caution as they see the damage inflicted upon their young men at close range. Doris only gets this fully deserved opportunity because of Jack Conan’s broken foot.

Anyway, about that hard edge. When Northampton attacked off a lineout on 33 minutes Doris instantly clocked the intended target and drifted into midfield to welcome Lewis Ludlam with a man and ball embrace. The England backrow was slow to rise as the former Blackrock schoolboy bounced up in his bright orange boots.

“Even going up against someone like Ludlum who has been at the World Cup with England, and acquitting himself well, and they were proper collisions with Harrison last week, again a very abrasive player and Tom Wood, who has been around the block a long time.”

Another moment to remove lingering doubt from the mind of new Ireland coach Andy Farrell came two minutes later when Matt Proctor carried into Ruddock and Doris. Ruddock ripped while James Tracy gathered the scraps to send Doris scrambling over the gainline. The yardage laid the platform for Dave Kearney’s bonus point-clinching try.

The nuts and bolts still need loosening for the undisputed star of this festive show. Doris only went mainstream on Saturday but further proof that Ireland should have built their attack around Jordan Larmour in 2019 was evident throughout his stunning performance.

Most of the 42,041 audience were still indoors sipping half-time brews when giant Fijian lock Api Ratuniyarawa was torpedoed towards the Leinster try line. Relieved of possession by a double impact from Cian Healy and Doris, it was Tadhg Furlong’s snappy pick and pass that Larmour juggled under his own posts before three players were beaten with an inside swerve, outside step and diagonal straightening into open country.

Suddenly he was over halfway. Ruddock and Scott Fardy carries slowed momentum before Doris arrived to power through the initial tackle once again. A clever grubber by Ross Byrne – on his latest audition for international honours – allowed James Lowe to score.

“We know Jordan has that ability to step but it is how he dealt with a couple of high balls that was the most pleasing for us,” added Cullen. “Again, you’ve got to be able to deliver on the nuts and bolts. On a good surface Jordan will always look dangerous.

“He played a lot of hockey in school. I am told a lot of the stepping comes from that education in St Andrews College. ”

Larmour’s last moment made everyone forget the chill. He only danced out of six attempted tackles because Doris expertly picked and carried off a five-metre scrum. Defence transformed into mesmerising attack by the nuts and bolts of a technically impressive number eight, with many miles still to run.

“More time in the saddle has been awesome for Larmour,” said Lowe, “and that 15 spot he has almost locked it up.”

The gift of Larmour should have been unlocked before now but what’s past cannot be salvaged.