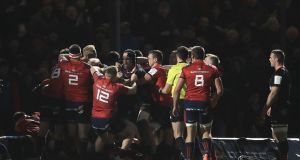 A fight breaks out between Saracens and Munster players in the 50th minute during the European Rugby Champions Cup pool match at Allianz Park, Barnet. Photograph: Adam Davy/PA Wire.

There was no shame in losing to the reigning champions after going toe-to-toe and blow-for-blow in this heavyweight Heineken Champions Cup collision, not least after losing their talismanic captain and key lineout man Peter O’Mahony in the warm-up and three more World Cup players during the game.

Munster resourcefully coped without O’Mahony and then Tadhg Beirne from the 11th minute at lineout time, defended brilliantly and stuck to their running game, albeit making little inroads themselves.

However, all changed, changed utterly, after the all-in scrap which spilled over the advertising hoardings in the 50th minute. Mark McCall has revealed how Saracens sought to copy Munster more than anyone, and here they did so in a way that perhaps not even he had envisaged.

For in many respects, it was the biter being bit. On so many occasions in the past in times of Munster trouble at Thomond Park, a fight would invariably change the mood music. The umbilical cord between team and supporters strengthened, the noise levels rose and the home players were inspired.

This time around, the temperature and intensity of the occasion, on the pitch and in the stands, was ratcheted up after that scrap, and particularly so by Saracens and their supporters. There was a new-found spite and energy to their work in the collisions.

Munster had the momentum at that time, JJ Hanrahan having just kicked them 6-3 ahead, and they were threatening to become only the second side, after Clermont, to beat Saracens in this competition at Allianz Park.

“Whether it was coincidental, I’m not sure, but we certainly played a lot better afterwards,” said Mark McCall, who admitted Saracens were “lucky” that Hanrahan missed the penalty which would have pushed the visitors 9-3 in front after the scrap. Thereafter they were restricted to just moments, the outstanding Jean Kleyn providing a couple of them when winning turnovers with a choke tackle and a lineout steal.

But after last season’s toxic semi-final between the two sides, when Billy Vunipola was the centre of attention, here the moral of the story was not to provoke his brother Mako either.

The two brothers were like men possessed in the final quarter, as Mako came up with a variety of big plays to swing the game Saracens’ way. There was his frog-marching double tackle in tandem with Nick Isiekwe on Tommy O’Donnell when also ripping the ball from him.

He forced another turnover when holding up James Cronin in the tackle but it was a lineout steal by Nick Isiekwe which led to the intense scrum pressure from which Billy Vunipola took out four men when charging off the base to put Sean Maitland over.

Then there was also Mako’s deft transfer to Farrell in the build-up to his own close-range try. From two sustained bouts of pressure on the Munster line in the final quarter, the first of which Farrell signalled for scrums rather than tapping over a penalty, Saracens came away with two tries.

Munster managed only a penalty from their sole siege in the first half, as the impenetrable Saracens defence kept them at bay in the middle third of the pitch. Ultimately, six points (or even nine) was never going to be good enough to win here.

“Saracens are a team that keeps applying the pressure on you,” said van Graan. “The scrum was a big battle, I thought we won a huge ball there on the 22 and they won one off of us. I thought the lineouts were pretty even.”

“They got a few more penalties, I thought the penalty count was favouring them so we’ll go and have a look at them,” said van Graan of the 11-5 penalty count against them by Pascal Gauzère, who was as poor as he usually is.

While Farrell could be understandably miffed with the penalty against him after the all-in scrap, Munster could rightly feel aggrieved with the first scrum penalty against them, when John Ryan had the shove on Mako Vunipola and Jamie George was first to pop up, and which eventually led to Saracens first three points. Ditto the ridiculous penalty for a high tackle against Conor Murray, albeit which Farrell missed.

“The only thing is missed opportunities. We had one or two missed opportunities, so did they. So a huge one to take on the chin and concede they were the better team on the evening, which I’ll do. They won the game and well done to them,” added the Munster head coach.

Even then, in the 75th minute, Munster had a kickable penalty inside the ten metre line about 15 metres in from the right, which had they taken it would have earned them a bonus point. That may not amount to anything come the completion of the pool stages, but Munster ought to appreciate better than anybody that you take what you get from this competition.

If nothing else, a point would have kept them two ahead of Saracens. Even if they’d scored a try, one losing bonus point would have been their same reward. It made no sense not to take the penalty and at least move into bonus point territory, with time still remaining to then go for the try and the win.

It made no sense at the time, and CJ Stander, who took over the captain’s armband when O’Mahony was withdrawn, effectively admitted it made little afterward either.

“I think at that stage we had just got back in momentum. We were thinking if we go here and set up a maul in the middle of the pitch . . . well, we tried it and it didn’t work out. That’s hindsight now, we should have gone for the three [points] but that’s the feeling you have on the pitch.”

“Look, we’ll probably have a chat as a leadership and then next time don’t do it again, see how we feel.”

Except, in this competition, there usually is no next time.