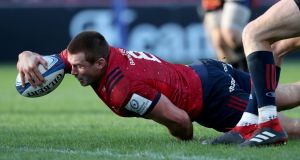 Munster’s CJ Stander scores a try against Castres in his side’s 30-5 win at Thomond Park on Sunday. Photograph: Dan Sheridan/Inpho

On another day Munster would surely have translated their superiority into a fourth, bonus-point try or even more. Nonetheless, Johann van Graan declared himself happy with a 30-5 win against Castres at Thomond Park yesterday which preserved one of the four remaining unbeaten records in the Heineken Champions Cup.

In the process, Munster extended their winning run at home in this competition to 11, and it also completed four wins out of four for the Irish provinces, which can never be sniffed at.

A 6-0 interval lead was particularly scant return from a one-sided first half in which Castres were so devoid of ambition that they actually kicked the ball out of hand (20 times) more than they passed it (18). This was park-the-bus rugby.

Two tries by Rory Scannell and CJ Stander, both created by an increasingly influential Conor Murray, and a third by JJ Hanrahan ultimately left Munster just short of a bonus point before Castres replacement winger Martin Laveau scored with the last play of the game.

The result cemented Munster’s place atop of a competitive Pool 2, three points ahead of Gloucester, with Castres believing they are still in contention on three points further back ahead of next Saturday’s rematch at Stade Pierre-Fabre. Most surprisingly of all, Exeter now look out of contention after losing 27-19 at home to Gloucester on Saturday.

“I think it was a good performance,” maintained van Graan, “and at half-time as a coach you have always got the feeling if they [Castres] score now it might be a totally different game but I thought all credit to our players after half-time.”

Hailing the defensive resistance, which was typically led at a key moment by captain Pater O’Mahony, van Graan said: “Look, in a perfect world you always want the five points but we are very happy with the performance and the points difference and very happy with the display given all factors.

“If you said at the start of the competition we would be leading at the halfway stage of course we would have taken it,” said van Graan. “A massive test awaits us in these doubleheader returns and you don’t just go to the champions of France in their back yard and get anything for free.”

The “factors” van Graan referred to were assuredly the late withdrawals of Joey Carbery and Chris Farrell. Carbery was given every chance to overcome a tight hamstring before being replaced by Hanrahan, who scored 20 points, while Farrell felt pain in his thigh during the warm-up and was replaced by Sammy Arnold.

Van Graan said it would be Tuesday before their well-being can be more clearly evaluated but the six-day turnaround counts against both players. With James Cronin and Stephen Archer both sidelined, another issue may be the load on David Kilcoyne and John Ryan, who played 73 and 80 minutes, all the more so given how Castres’ scrum improved when they changed their frontrow.

There was also enough in Castres’ resistance as well as ill-feeling between the sides to keep the French champions interested in Saturday’s rematch at Stade Pierre Fabre.

“Yeah, look, we also do get a warm one,” said O’Mahony wryly of the reception that awaits Munster next Saturday on and off the pitch. Sporting some stitches over his left eye, he added: “We’ve played each other the most of any two teams in the competition and it’s always incredibly intense and heated. You’ve the cauldron over there that is Castres Rugby and we’ll be under no illusions that we’ll be going into a hostile environment.

“They’re the days that you look forward to though. It’s the biggest test of all, the French Top14 champions in their backyard, it doesn’t get any bigger than that but we’ll be looking forward to it and we’ll certainly be very conscious of the test that’s coming.

“You could have a beautiful day in the south of France and it’s a different animal. We’ve done a lot of video on them this week, and that’s the nature of the back-to-back, you’ve a little less work to do and we’re lucky with the six-day turnaround, we don’t have as many days of training as we would normally have but you’ve done a bit of your work already.

“Neither of us are going to change the wheel for next week so you’ve a bit of your work done but it’s just a different animal over there.”

The Castres forwards coach Joe El-Abd admitted: “We’re very disappointed. Obviously we had big ambitions today, but we got dominated in every sector and that’s reflected in the result. We’ve got no complaints about the result.”

The sides drew 17-all at Stade Pierre-Fabre last season and looking ahead to next Saturday’s game El-Abd said: “I think it’s going to be a very tough game. Very different? I’m not too sure. We know what to expect, we played them last year at home and that game was different to the one away.”

“Last year we got a draw, [this time] we need to win 4-0 in points. Today, we lost 4-0 and they didn’t get the bonus point, so we’re still alive in the competition and next week we are going to need to do what they did to us today.”

Leinster also have an issue over their first-choice outhalf and captain, Johnny Sexton, who limped off toward the end of the champions’ hard-earned 17-10 win over Bath at the Rec.

In the expectation that Toulouse complete a double over Wasps after their 24-16 win at the Ricoh Arena eliminated Dai Young’s team, Leinster need to do likewise when hosting Bath at the Aviva Stadium next Saturday in their marquee pre-Christmas fixture.

Ulster will be seeking an unexpected double over the Scarlets at the Kingspan Stadium next Saturday after effectively knocking out last season’s semi-finals with Friday night’s bonus-point win in Llanelli.

Simon Zebo was again among the try scorers as Racing maintained a hot pace in Pool 5 with yesterday’s 36-26 win over Leicester, securing a bonus point by the 33rd minute. However, they conceded three second-half tries and a bonus point to the Tigers, which keeps them alive in this group too.