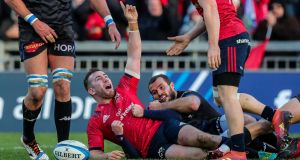 As with their previous home win over Gloucester, there was a discernibly underwhelmed feeling amongst the Thomond Park faithful and the home players.

A 30-5 win over the French champions is a good day at the office, but with a more clinical edge Munster would surely have made their dominance in territory and possession yield a bonus point.

Instead they had to settle for three tries, the first two created by Conor Murray with a couple of classy interventions even if still not back to his best, and another well carved effort finished off by JJ Hanrahan, who landed six from six in a 20 point haul. Amid all the attention of Joey Carbery, Hanrahan has actually been playing some good rugby this season.

Hanrahan had been a late replacement for Carbery, who tweaked his hamstring in training on Thursday and had been given every chance until being withdrawn on the morning of the game. Munster were further disrupted by Chris Farrell pulling up in the warm-up, and he was replaced by Sammy Arnold, with Tyler Bleyendaal and Jaco Taute being called up to the bench.

Even so, that could hardly excuse their lack of precision in the first-half. To the palpable bemusement of the Sunday brunch-time crowd, Munster just weren’t their clinical European selves.

Castres were in classic French, away-day, containing mode. They defended and tackled with gusto, and were up for a fight alright, particularly when their pride was hurt at scrum time; they just weren’t up for playing much. 21 minutes elapsed when they finally had their first potential attacking foray after reclaiming a Murray box-kick on the home side’s 10-metre line.

From the very next phase, outhalf Benjamin Urdapilleta launched a fairly aimless crossfield up-and-under which came to nothing. That was about the sum of their ambition, save for a procession of box-kicks by scrumhalf Ludovic Radosavljevic, most of which were purely chased and ably dealt with by the Munster back three and Hanrahan.

Almost 50 minutes in they had kicked the ball more than passed it, and two of their back line hadn’t touched the ball. They deserved their ‘nil’ but presumably will play with altogether more ambition next Saturday at home.

The pre-match rain relented just before kick-off but on a cold and blustery day, both sides took to the air. Castres did very little else in truth. There were eight kicks in the first four minutes, culminating in Scott Spedding’s punt down the middle from outside his 22 rolling inexorably over the dead-ball line.

This led to a penalty against Kevin Gimeno for not rolling away after a Tadhg Beirne carry, from which Hanrahan opened the scoring. After the Scannell’s combined at lineout time, hooker Niall finding Rory in midfield with a long throw, and another good carry by Tadhg Beirne, Florian Vialelle was offside, but when Munster turned down a probable three points, this time Niall Scannell over-threw to Peter O’Mahony.

Munster did manufacture a clean bereak off a lineout when Chris Cloete gathered Beirne’s take and passed infield to Murray, for Andrew Conway to scorch through from the scrum-half’s inside pass and he might have passed to the supporting Haley before being tackled.

Two Beirne knock-ons, the second fairly fired at him by Murray, undid two more attacks before Hanrahan made it 6-0 after the Castres frontrow buckled again.

Murray might have gone all the way from halfway when just failing to complete an intercept off the base by Radosavljevic before the half ended anti-climacticall,y if perhaps fittingly, when Rory Scannell overhit a penalty from halfway into touch in-goal.

Munster soon had another attacking platform when Spedding kicked out on the full, not realizing Taylor Paris had deflected Conway’s grubber outside the 22. A lineout led to a scrum and after the recycle off CJ Stander’s carry, Murray spotted an unmanned blindside to snipe and offload inside for Rory Scannell to beat Loic Jacquet and score off a clever support line. Hanrahan landed a superb conversion.

However, Castres’ introduction of a new frontrow reaped a reward of a penalty at their first scrum. Urdapilleta pushed it wide but after recourse to the TMO, Murray was adjudged to have knocked in the ingoal area.

Suddenly Castres were attacking off a five-metre scrum , but this seemed to wake Munster up. First O’Mahony wrestled the ball from Thpomas Cambezou, then Cloete won a turnover penalty and although a 12-phase attack was repelled Castres were again done for not rolling away and Hanrahan struck a fine penalty.

The penalty count was 12-2 but ne’er a hint of a yellow card from JP Doyle.

In any event, going into the last quarter Munster upped the tempo. One sustained attack ended with Murray sniping into an inviting gap and offloading one-handed out the back for Stander to break Spedding’s tackle and score. Murray was soon replaced to a standing ovation.

Realising the urgency to give themselves a shot at a bonus point, Arnold ran a good line and offloaded back to Rory Scannell and he passed inside for Alby Mathewson who in turn found Hanrahan for a fine try.

Instead of pusing on for a fourth though, Julien Caminati broke through and when Conway tackled Rory Kockott without the ball the Munster winger was binned. With the last play, Spedding helped on a long pass by Urdapilleta for Martin Laveau to score a try which will give Castres hope for next Saturday’s rematch.

Celtic slip up again as Aberdeen strike late in pulsating draw 14:40
GAA discourages the use of team buses when travelling to matches 11:25
Unbeaten Khabib to retire after UFC 254 win over Gaethje 10:12
Justin Thomas finishes with a kick to lead by one in California 07:46
Ulster aiming to douse Dragons’ fire and extend unbeaten start 06:00
Crossword Get access to over 6,000 interactive crosswords