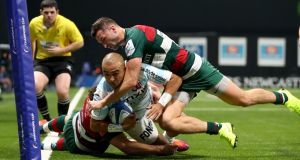 Leicester kept their slim Heineken Champions Cup hopes alive by securing a four-try bonus point in a thrilling 36-26 defeat to Racing 92 in Paris.

Racing secured a bonus point of their own before the break through tries from Virimi Vakatawa, Juan Imhoff, Simon Zebo and Baptiste Chouzenoux.

Olivier Klemenczak added a fifth after the break, but Leicester refused to buckle and ensured they left the French capital with something to show for their efforts.

Leicester went down to 14 men in what was an early blow as Tuilagi was yellow carded for a deliberate knock on from a Finn Russell pass.

It gave Racing impetus and after they kicked the resulting penalty to the corner, Vakatawa’s raw power saw him crash over Ellis Genge to score. Russell converted.

With their opposition a man light, Racing were rampant. Imhoff surged clear and although he put a foot in touch, the wing was soon over to score with plenty of space out wide.

Russell could not convert and Leicester hit straight back.

From a strong Tigers scrum, Ben White picked up at the base and popped the ball up for Wales international Holmes who spun out of a tackle to finish. George Ford kicked the goal.

Russell has had a superb start to his Racing career and he then set up Zebo in fine fashion. Dodging two Leicester tacklers, the former Glasgow man produced a superb offload to find the Irishman.

He did the rest and Russell rubbed salt in the wound with the extras.

Matt Toomua was a standout Leicester performer in attack and Imhoff came close to a second, but he failed to get downward pressure after hacking on a loose ball following a Racing counter-attack.

There was still time for two more tries before the break. Chouzenoux crashed over for a converted bonus-point score for Racing and Kalamafoni responded for Leicester from close range, with Ford adding the extras.

Russell had missed a penalty with the last kick of the first half and Racing lost Eddy Ben Arous to injury when the game resumed.

Tuilagi then made amends for his yellow card with a fine finish. Jonny May got on the outside of the Racing defence and when the ball was spread back right, Michael Fitzgerald’s pass put Tuilagi away.

Ford’s kick drifted wide, but Leicester then suffered their second yellow when Genge was carded for playing the ball on the floor and referee Nigel Owens lost patience.

Russell booted the three points and Racing had a try rightly ruled out for a forward pass, but on the hour mark the Scottish international created a converted score for Klemenczak.

It ended any Leicester hopes of a win, but they never went away.

Ford intercepted a Racing pass and hacked ahead. Zebo got back to clear to touch, but Ford cleverly took the line-out quickly to Thompstone who had an easy finish.

Toomua quickly drop-goaled the conversion, but that was the end of the scoring.

1 Ferrari’s Charles Leclerc ‘will not take the knee’ before Austria GP
2 Serpentine stays on from the front to steal Epsom Derby for Aidan O’Brien
3 Monica Seles: The warrior queen who could have been the best ever
4 Glorious Greenwood as Man United thrash Bournemouth
5 John Egan rescues a point for Sheffield United at Burnley
Real news has value SUBSCRIBE