Connacht find form in the storm to triumph over Perpignan 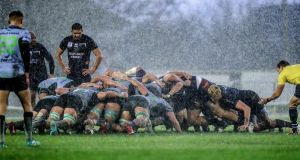 The Connacht and Perpignan pack engage in the miserable conditions at the Sportsground during their European Challenge Cup match on Saturday. Photograph: Dan Sheridan/Inpho

A wild Saturday afternoon storm descended on the Sportsground as Connacht made it four wins on the trot against a Perpignan side enduring a joyless season of rugby. As the last seconds ticked away and sheets of rain whipped across the floodlit field, the crowd of 5,000 laughed when the announcer asked supporters not to encroach the pitch afterwards. Fat chance.

Rarely has any outdoor sports event taken place in such hostile conditions: there were moments when the players had to shield their faces from the hailstones. Connacht didn’t get the bonus point their performance arguably merited in this Challenge Cup game but Andy Friend was more concerned with the welfare of his players over 80 gruelling minutes on a hypothermic afternoon.

“There was a couple of wingers I was worried about, mate,” he said as the Sportsground emptied.

“It’s tough. They are sitting out there and not moving a lot and we did send a message at one stage to get those boys running. We prepared hot water bottles for half-time to try and warm them up a bit. There is a concern about it. But they are fine. It was always going to be tough to get five points out there tonight. Especially after the first half. We were probably one try shy. I thought our second half was very good and in the end a 12-point victory was a real compliment to the players. And we are still alive in this competition.”

It was no day for adventure and Connacht enjoyed mammoth ball-carrying and tackling shifts from Quinn Roux, James Connolly, Peter McCabe and Bundee Aki in a Challenge Cup fixture that was as much about managing the weather as the other crowd. A late try by Kyle Godwin warmed the crowd of 5,011 but the home team were in control throughout here – at least insofar as it was possible for anyone to be in control.

Not long after three o’clock, all the scare stories that the French visitors might have heard about Galway rugby materialised. The sky, dark to begin with, blackened. The wind kicked up. Torrential sheets of rain moved across the pitch. Naturally, the French men found themselves playing into it. They were penned in to their own 22 and found themselves trailing by two tries to nil after just 20 minutes.

After David Horwitz watched his fifth-minute penalty career off the post, he went for the flags thereafter as Connacht enjoyed an overwhelming territorial advantage. Darragh Leader cut a good angle on a set-piece from a Connacht scrum just to the right of the Perpignan posts and crashed through the cover for a 10-minute try. Connacht went wide from another scrum dead centre on the Connacht 22 and Aki made the finish look simple, boring through the arriving cover.

The only time that Perpignan enjoyed any serious territorial gain when Connacht kicked for touch on the full. Even then, the defensive line was solid and Leader snuffed out a speculative cross-field kick with an assured take in treacherous conditions. It’s hard to overstate how difficult the handling was: in the 15th minute, Matt Healy chased back to tidy up Enzo Selponi’s clearance kick and even though he did everything perfectly, the ball simply spilled out of his hands for a knock on.

But Perpignan, under fierce pressure in the scrum, could do nothing to take advantage of the situation and ran in scoreless at half-time having lost lock Yohann Vivalda to the sin bin after a high tackle.

It was a bleak moment for the French side, struggling through an 11-game losing streak in the domestic league and leaving many of their first-choice players behind for this assignment, After they arrived in Galway, news came through that former Perpignan player Barend Britz had been tragically killed in an incident outside the pub that he ran in the city. Britz was a former team-mate of current coach Patrick Arlettaz. A minute’s silence was held in his memory before the start of the game kicked off in the Sportsground.

In the second half, Connacht were more or less playing into a storm. They held possession for an unbroken four-minute sequence, with scything runs from Horowitz and Aki but still found themselves sandwiched between both 10 metres-lines, going nowhere fast and barely able to see through the rain. It was an extraordinary sight.

Perpignan’s opening score came from an infringement by Connacht at the breakdown on their possession: Buosquet’s thumping penalty kick through the gale was terrific.

On 55 minutes, the replacements arrived. So did the hailstones. A precision kick for touch from a penalty by Seiponi brought Perpignan close to the Connacht line during a lull period in the game and from the line out, replacement prop Manu Leiataua barged over to the delight of the visiting bench and their admirably cheerful band of travelling supporters. All of a sudden, Connacht had 10 minutes of a game to manage. They did that with no undue fuss: Perpignan’s scrumhalf Sadek Degmache was lucky not to be carded and was immediately replaced after holding Caolin Blade, in for Connacht, by the throat during a break in play.

“I just said to the players don’t under estimate the strength of that win given that we’ve just come back from South Africa,” said Friend.

“We only landed on the Monday and had 11 changes to the team so we had a lot of blokes who weren’t in South Africa who had to step up and did. We had sickness in the camp this week – players with dodgy bellies but we found a way to win against a Perpignan side that every time they lose are hungrier for the win so I was really proud of them.”

The teams meet again in Perpignan next Friday night at 7pm.

1 Johnny Sexton aware of how Ireland can offer fans an escape
2 Gerry Thornley: After 32 weeks the Six Nations is back up for grabs
3 Extremes of sweet and sour for Solskjaer as Man United show signs of revival
4 Arsène Wenger: Arsenal was a matter of life and death to me
5 Stockdale and Ringrose on board with expansive Irish game plan
Real news has value SUBSCRIBE