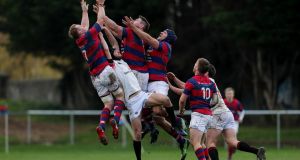 Outhalf James Fennelly, Division 1A’s top scorer with 77 points, kicked three penalties and a conversion as Dublin University claimed the scalp of Clontarf with a hard-earned 16-12 victory at Castle Avenue.

The man nicknamed ‘Jesus’, because of his hirsute appearance, has been superstar-like in his recent performances, helping Trinity to four wins in five rounds. They used a big wind advantage to lead 16-0 at the turnaround against Clontarf, centre James Hickey knifing through a gap for a 14th minute try and Fennelly doing the rest.

Tries from Matt D’Arcy and former Trinity favourite Angus Lloyd had Clontarf just four points in arrears, but the visitors’ aggressive and disciplined defending, coupled with some strong scrummaging, saw them hang on for a famous win at the Bull Ring. Defending champions Lansdowne are next up for fourth-placed Trinity, fresh from their 31-15 bonus point success against UCC.

Former Ireland Under-20 international Aaron Conneely chipped in with two tries against the Cork side, taking his haul to four in two games, as Lansdowne made it six win in a row. They are four points behind leaders Cork Constitution who maintained their impressive form with a clinical 26-3 bonus point dismissal of Young Munster.

Fullback Shane Daly’s 62nd-minute try completed the scoring for Cork Con who, for the third time in four rounds, restricted their opponents to just three points. Scott Penny’s older brother Alex scored one of five tries as he captained UCD to a convincing 31-3 bonus point triumph over Terenure. Fellow Leinster players Hugo Keenan, Jimmy O’Brien and Paddy Patterson all started for the students.

Meanwhile, St. Mary’s College are the new leaders in Division 1B, seeing off Banbridge’s challenge with centre Myles Carey touching down twice in a 28-7 bonus point win at home. They took advantage of Malone’s 16-12 loss to Old Wesley with full-back Rory Stynes kicking two second half penalties to take the spoils for the Dubliners.

1 Roger Federer: The balletic genius whose greatness goes deeper than numbers
2 Game Changers: Vincent O’Brien, a pioneer who took Irish racing to the world
3 Dara O’Shea moves West Brom closer to a top flight return
4 Super Rugby AU offers glimpse of rugby’s future if law changes are adopted
5 Rory McIlroy: ‘It sort of sucks going off in the middle of the pack on a Sunday’
Real news has value SUBSCRIBE