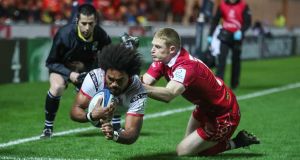 Ulster moved to the top of Pool Four of the Heineken Champions Cup with a stunning bonus point victory of the Scarlets in Llanelli.

The Irish province will now fancy their chances of progressing to the knockout stages while the Scarlets are staring into the abyss having been eliminated after a mere three games.

The hosts scored three tries of their own courtesy of a brace from Steff Evans and a touchdown from Dan Davis while Rhys Patchell and Dan Jones kicked seven points between them.

Patchell opened the scoring for the hosts with a straightforward penalty after Ulster had infringed at the breakdown.

Ulster hit straight back when Henry Speight broke through two tackles in the Scarlets 22 before being brought down by McNicholl.

But the visitors didn’t have to wait long to cross the whitewash. Addison sparked the attack with a clean break from just inside his own half before offloading to McCloskey.

The big centre shifted the ball on to Stockdale who found no resistance whatsoever from the covering Gareth Davies to cross for Ulster’s first try.

Ulster were very fortunate not to lose Sean Reidy to the sin bin when his high hit forced Scarlets lock Lewis Rawlins off the field. The Scarlets opted to go for the corner from the resulting penalty with their pack proceeding to shunt the Ulster eight backwards. Scrum-half Davies sniped off the back of the maul before being brought down just metres short of the try-line.

After a couple of powerful carries by the Scarlets forwards, Wales wing Evans showed some dancing feet to beat two Ulster defenders and cross the line with Patchell’s conversion putting the hosts back into the lead.

But Ulster hit straight back with Speight grabbing their second try at the far right-hand corner after some efficient play but the home sides pack.

The Scarlets huffed and puffed in Ulster’s half as the clock ticked towards half-time but their endeavours came to nothing with the visitors holding a slender 13-10 lead at the interval.

Wales centre Davies tried his best to spark his side into life with a powerful 40 metre break into Ulster’s half. But with men outside him, centre Kieron Fonotia lost the ball in contact meaning a promising Scarlets attack broke down.

Addison put daylight between the two sides when he hit the perfect angle to slice open the Scarlets defence for Ulster’s third try.

Despite being 10 points behind, the hosts refused to throw in the towel with Davies causing mayhem whenever he touched the ball. The Lions star made another lovely break before offloading to Evans who chipped the ball forward.

The ball was deflected by an Ulster player but it wouldn’t fall favourably for Gareth Davies meaning Ulster got out of jail. Ulster’s scrum had been a huge strength in the first 40 but the Scarlets turned the tables, destroying the visiting side to earn a penalty.

Captain Ken Owens made a big call in turning down a straightforward three points in favour of another scrum. The Scarlets went through the phases before Rory Best saved Ulster with a terrific turnover at the breakdown.

But Pivac’s side finally broke Ulster’s resistance when former Super Rugby star McNicholl cleverly picked up from the base off the ruck before perfectly executing a Sonny Bill Williams style offload to put Evans over for his second.

The Scarlets’ comeback was short lived as former Springboks star Coetzee sneaked in at the corner after an initial charge up the middle by Iain Henderson.

A late try from Davis, who burrowed his way over from short range, ensured a grandstand finish as the hosts tried desperately to salvage their European campaign. But Ulster defence held firm to secure a notable victory away from home.