Leinster march ever onwards after grinding it out against Bath

Gavin Cummiskey at The Rec 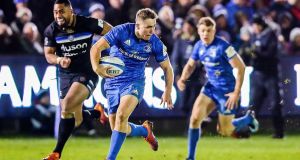 Leinster march ever onwards but Bath produced an enormous defensive effort to drag the champions into a ferocious contest. It took a spark of magic from Jordan Larmour and their reliable outhalf - Ross Byrne not Johnny Sexton - to guide them home with four valuable points.

After revelations about abusing pain-killers, Brian O’Driscoll’s name rang out in modern rugby circles during the week but come game day it was Larmour who continued his passable impersonation of every 20-something’s North Star when he was growing up.

Larmour is a very different player to O’Driscoll who performs very similar feats that can only remind people of the old master. The intercept, for example, is a rare and dangerous skill to pull off.

Miss the ball and it’s probably seven points the other way, but grab it and you are free. Even Joe Cokanasiga couldn’t catch him after James Wilson’s floater invited Larmour’s risk.

That broke the deadlock with 48 gruelling minutes already played.

The rain came soon after with the incessant cheer-leader from a loud speaker commanding: “LET’S BE OUR 16TH MAN, COME ON YOU BATH!”

Sometimes a crowd of 14,425 are happy to watch a gripping game of rugby in peace. They cleared their throats here when it mattered.

Man of the Match James Ryan must be mentioned in isolation. The 22-year-old’s impact and relentless desire to carry or clean rucks remains outstanding in every game he plays.

Ryan had stiff competition from Francois Louw and Sam Underhill.

Louw was poacher king in the opening 40 minutes, dominating Josh van der Flier and Dan Leavy at crucial breakdowns, but it was Leinster who were denied a certain try on the stroke of half-time. After a typical 20-plus phase attack inched towards the Bath line, the hemisphere-hopping Springbok’s hulking frame clamped over Garry Ringrose.

That was the difference, initially, Louw’s hands on the ball, while Underhill also made his presence felt with a thumping and perfectly legal 17th minute hit on Johnny Sexton.

The World Player of the Year was clearly rattled. He soldiered on until James Wilson, the veteran Kiwi fly-half retained by Bath to cover injuries to Rhys Priestland and Freddie Burns, had him doubled following another wincing tackle.

Sexton got up and sought the ball.

As usual, the Leinster 10 invited extra attention by hitting rucks and mixing with anyone who was interested.

There was plenty of bite. The ferocity of Bath’s rush defence guaranteed as much.

The howling wind calmed and splattering rain dried up long enough for an old school thriller to break out. The fielding of four opensides ensured plenty of mad scrambles on the ground but Leavy, despite growing into the game, struggled with the basic number eight duty of picking from the base of scrums.

Twice he was caught, the second fumble leading to Bath tighthead Henry Thomas powering over on 21 minutes. Wilson converted.

Leinster’s response came via a lovely James Lowe offload to put Sexton dashing into open country. Ringrose took up the baton but Louw and Underhill combined for a textbook steal off Rhys Ruddock.

Dev Toner and Leavy responded with a smashing double tackle to dislodge the ball from Louw’s grasp.

That allowed Leinster to march into Bath’s 22 and when Cokanasiga was pinged for not releasing Sexton ignored the three point option (he’d already struck the post). The lineout was flawless with Sean Cronin finding Ruddock before piloting the ball over the line. Sexton converted.

Seven-all at the break, there were plenty of important cameos, like Rob Kearney cleverly ducking under the thundering Cokanasiga to avoid a heavy collision with the Fijian or Thomas sprinting through midfield, all set to make it to the line until Kearney intervened.

Cian Healy got in on the openside clinic with some crucial interventions early in the second half - when the game was still in the balance - but it was Underhill who became the dominant backrower on show. He made one superhuman aerial catch over James Lowe. Leavy was replaced on 53 minutes but stay tuned for that particular rematch at the Aviva next weekend - Bath can still qualify - with the trilogy promised when England visit Dublin in February.

The latest official call for contact with the head indicates the officials will not be refereeing with any consistency throughout this season’s Champions Cup. Cokanasiga was penalised, and no more, despite the accidental high tackle on Luke McGrath.

On it went. The game clinching score was kicked by Byrne - while Sexton was receiving treatment, again - with seven minutes remaining after Jamison Gibson-Park produced a fabulous moment of openside play to earn the penalty. Not bad for a reserve scrumhalf. That sort of game.

Wilson’s penalty at the finish earned Bath a deserved bonus point but Leinster march ever onwards.