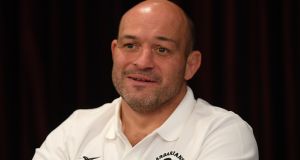 Rory Best: “You’ve a duty when you put on a Barbarians shirt to put on a show. To keep the value of the Barbarians we’ve got to find a way to win as well.” Photograph: Mike Hewitt/Getty Images

Rory Best believes one of the benefits of retiring is that he will not be obliged to attend the postmortem into Ireland’s latest failure to make the semi-finals of the World Cup.

The former Ireland and Ulster hooker played his final game for his country in their quarter-final shellacking at the hands of New Zealand, a result that extended Ireland’s unenviable record of never having won a knockout match.

“It’s bitterly disappointing but the flip side of it is that I don’t have to sift through the wreckage,” he said.

“That’s for the boys to do when they come together at Christmas ahead of the Six Nations. They’ll be under a new coaching set-up and we’ll see how they push it forward. Ultimately with New Zealand, if they’re playing to the best of their ability, it can be a thing that it doesn’t matter what you do if they play that well.”

Asked how proud he is of his career the 37-year-old, who played 124 times for Ireland over 14 years, has somewhat mixed emotions.

“I think the problem is that when you’re just finished a World Cup, you’re focused so narrowly on that one result, for a bit of time you allow it to define your career. I think when time moves on a bit and I widen my view, I’ll be immensely proud of everything I achieved with Ireland.”

Before hanging up his boots for good, Best must attend to another bit of unfinished business, having been called up to captain the Barbarians for a three-match November tour that kicks off at Twickenham today.

Picked by the England coaching duo Eddie Jones and John Mitchell, the side Best leads out to play Fiji will include the South Africa World Cup winners Tendai Mtawarira, Makazole Mapimpi and Lukhanyo Am, as well as a host of less familiar names, many of them from the Southern Hemisphere.

Did Best recognise them all?

“I didn’t, no. I certainly knew some of them and the rest I had to introduce myself and get to know them.”

The Barbarians’ match against similarly flamboyant Fiji should make for entertaining viewing but Best stressed that while putting on a show is imperative the importance of victory should not be overlooked.

“You’ve a duty when you put on a Barbarians shirt to put on a show. To keep the value of the Barbarians we’ve got to find a way to win as well.”