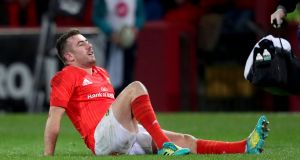 JJ Hanrahan goes down with a suspected hamstring injury during the victory over Ulster at Thomond Park. With Carbery already ruled out, Munster face trip to Ospreys with just one established outhalf Tyler Bleyendaal fit. Photograph: Dan Sheridan/Inpho

It seems far too soon for European rugby but it is upon us. That is the general unspoken consensus as the Irish provinces struggle to cope with mounting injury lists in the wake of the World Cup misadventure in Japan.

Munster and Connacht are in particular bother with the western province facing a full-scale second row crisis now that Sean O’Brien (shoulder) and Ultan Dillane (back) have joined Gavin Thornbury and Quinn Roux in the infirmary.

An update on the seriousness of Ireland prop Dave Kilcoyne’s injury, suffered while scrummaging in Limerick last week, is due on Monday.

Johann van Graan has a serious decision to make. So big it could require signing off by IRFU high performance director David Nucifora because Munster are heading into the Champions Cup, away to the Ospreys on Saturday, with one established outhalf now that JJ Hanrahan (hamstring) and Joey Carbery (ankle) are both unavailable.

Tyler Bleyendaal, who is Irish qualified, was called into action after just 29 minutes of Saturday’s 22-16 Pro14 victory over Ulster at Thomond Park when Hanrahan was forced off with a suspected tear following Matt Faddes’ marginally late tackle (deemed legal by the match officials).

“It looks like a hammy,” said the Munster coach. “Straight away after that late hit our doctor said he’s got to come off. We will scan the hamstring on Monday and know more then. Obviously it is a big concern for us with Joey out as well.”

Van Graan did not rule out adding a foreign outhalf to their European roster but Nucifora might prefer to offer assistance from inside the Irish system with Harry Byrne a potential short term solution. Byrne, younger brother of Ross, has already featured four times for Leinster this season but the expected return of Johnny Sexton could see him drop to fourth choice behind Ciarán Frawley.

“He has played at 10 for Munster before. He is a very good goal kicker. The next option is Ben Healy [the Ireland under-20s outhalf] which would be exciting if we need to swap him in. That’s currently our options. Worse case scenario we have a few nines who can play 10 before, like Neil Cronin. ”

Keith Earls is expected to return this week but Tadhg Beirne is being “managed” – whatever that means anymore – with a potential reappearance against Simon Zebo’s Racing 92 at Thomond Park on November 23rd.

“The classic World Cup guys coming back question,” smiled Ulster coach Dan McFarland ahead of their trip to Bath.

“Getting them integrated again, they are all individuals – covering more clichés – it is all done on an on individual basis . . . For me, you’ve got to get them straight back. As soon as they are back and rested and mentally ready you get them into training and back out on the pitch.

“Cohesion is really important in rugby. It was quite difficult for us at the start of the season because we have niggly injuries . . . I would just like to have seen guys as a unit for a bit longer prior to going into Europe.

“It is the nature of the job. The modern day rugby player is much more used to coming straight back in.”

Defending champions Saracens are taking a different view of this season’s Champions Cup. Director of rugby Mark McCall has suggested that the threat of relegation from the Premiership, due to a 35-point deduction for breaching salary cap regulations, forces the club to prioritise their domestic competition this season.

“We have a plan for the worst-case scenario which will affect our strategy around the Champions Cup,” said McCall after the 21-12 victory over Gloucester at Kingsholm when rival fans waved fake money at Saracens players.

“Were we to be relegated, I think we need to do some good thinking and proper planning. There is a Lions tour at the end of next season and we will see. Our job, if the points deduction remains, is to try to stay up and that’s what we’ll try to do.”

“We would have had some big conversations anyway about how they were feeling because it’s unrealistic to think that some can come back from five months away and play in a Champions Cup game two weeks after a World Cup final, so we were going to have those conversations, but those conversations are a bit different now.

“When we play like that, all these players deserve to experience European rugby and that could be a big benefit to the club in the long term.”

Munster face Saracens home and away in December.

Nakarawa joins Ulster as Madigan and Herring extend deals 17:57
Money talks as ESPN and UFC still cling to toxic Conor McGregor brand 17:00
Klopp says Lampard can succeed at a club with more patience 16:21
Pádraig Harrington says Ryder Cup must go ahead in September 14:43
Allaho could be Ryanair bound after assured win at Thurles 14:13
Crossword Get access to over 6,000 interactive crosswords