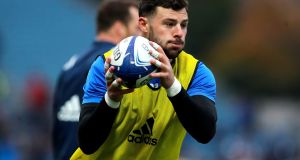 Robbie Henshaw: “The struggle with injury is part of the game and every player has to deal with it, but hopefully a little bit of luck is on my side for the next few months.” Photograph: Ryan Byrne/Inpho

If it wasn’t for misfortune Robbie Henshaw would have no luck at all on the injury front over the last couple of seasons. Gallows humour, like an anaesthetic, can wear off quite quickly.

A hamstring curtailed his involvement in the Rugby World Cup. Slated to return to Leinster colours for the Pro14 match against his previous employers Connacht in the Sportsground, illness intervened and forced him to withdraw, laid low by a fever.

It was a rare occasion when there was a silver lining, at least as far as his mother was concerned.

“My family weren’t too excited about it [me lining out against Connacht], but it was a little bit frustrating not to play. Just my mum), my dad was alright. They’re not too caught up in it, but she didn’t want anyone from Connacht giving out about me. She decided if I did play there she wouldn’t go.

“I was looking forward to going back and playing there. It was strange to know what the reception would have been like. I was wondering myself whether it would be a cheer or a boo.”

So was there any suggestion with your former teammates that you might have pulled a ‘sickie’ on purpose?

“A little bit, but it was all harmless.”

He was originally left out of the Leinster matchday squad for the Heineken Champions Cup match against Benetton last weekend but was then drafted into the replacements when centre Joe Tomane complained of a tight hamstring in the warm-up.

Tomane and the player who deputised for the Australian international, Rory O’Loughlin (shoulder) are both doubtful for Saturday’s trip to Lyon and in those circumstances Henshaw should partner Garry Ringrose – who scored a hat-trick of tries in a man-of-the-match performance against the Italian side – in France.

Henshaw was grateful for the unexpected return to the match environment the last day. He conceded it has been tough in recent months to fight the clock on the injury front but added he can’t afford to mentally dwell on the setbacks. The focus has to be on looking ahead and doing what’s required to get him back on the pitch.

It sounds simple but it’s been anything but; not that he’s complaining. Most sportspeople develop a philosophical streak when it comes to injury that allows them to cope. He said : “The only way is just get back on the pitch and get on with it.

“And that’s [the same] for every player, you just look forward to getting back, [focus] on the enjoyment of the game, coming into work every day, enjoying the surroundings here, enjoying meeting the lads, just having the craic and putting in the hard training.”

It’s fair to surmise that his ideal Christmas present would be an injury-free run.

“Yeah absolutely and hopefully it’s a long run this time because it has been interrupted the last few years. The struggle with injury is part of the game and every player has to deal with it, but hopefully a little bit of luck is on my side for the next few months.”

A starting point is against the French Top 14 leaders Lyon, who have won eight of nine matches domestically but were beaten 25-14 by Northampton Saints at Franklin’s Gardens last weekend. Henshaw said: “We had a good scout of them last week and this week. They’re a really exciting team and they kind of remind me of how Toulouse play rugby.

“They’ve a similar kind of style and have that French flair; they keep the ball alive with their offloads, and they obviously have that physically dominant pack as well. We know the surroundings, we played in that stadium three years ago against Clermont and it is cauldron-like where the crowds are on top of you.”

The Leinster group have already spoken about last year’s tournament when, after beating Wasps 52-3, they travelled to Toulouse and lost in round two.

Henshaw agreed: “There was some talk around how we started so well last year in round one and then we went to France and we were confident and the game was decided on fine margins. It’s mentioned alright and I think every player that played in that game knows what’s coming; it reminds you how hard it is.

“You have to get the point across early in the week that it’s different to any away game that you play in the Pro14. I think it’s the mentality of the crowd, that French mentality, it’s completely different. There’s also a bit of excitement as well to get there and to put in a performance.”

Is there an acclimatisation period in switching from Ireland to Leinster patterns?

“’Yeah, the first couple of sessions can be tricky because sometimes you get mixed up with calls and stuff like that, but once you get on the pitch, you find that the terminology comes back pretty quickly after a few missed calls and then you get it right.

“Players are different. As soon as I get back here, I write down all the calls just on a page and make sure I know them all just to have my Leinster hat on. It’s pretty seamless once everyone is back training on the pitch. Training here is so good, everyone enjoys it and it’s tough. It makes you work at match pace as well.”

1 Colin Kaepernick’s exile is too fresh for NFL to speak out on US protests
2 Ken Early: Why international football is fading into obscurity
3 Kick It Out urges Premier League players to take a knee
4 ‘A radical departure’: Who are CVC and what are their plans for rugby?
5 IRFU plan gives club rugby hope of return to action this year
Real news has value SUBSCRIBE

Kick It Out urges Premier League players to take a knee 20:40
PGA Tour wants players to take Covid-19 tests before attending events 18:47
Smooth return to racing in Britain gives hope going forward 17:00
Optimisim that Irish Classics won’t be domestic only 16:36
IRFU plan gives club rugby hope of return to action this year 16:36
Here is your handy guide to sport on television this week