The Offload: Penny hasn’t dropped inside the bubble for Darren Cave 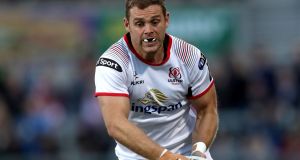 Cave man stands up for Ulster

“Six months out of the bubble made me realise just how naive – and you are not in this category I wouldn’t have thought because you are very proactive– just how indoctrinated or institutionalised we are as athletes,” Trimble told Cave on the House of Rugby podcast. “Stuff that applies in the life of a professional rugby player – day in, day out – just doesn’t work elsewhere.”

The old friends giggled about pulling down the pants of team-mates and shower banter.

Trimble has crossed over to the media whereas Cave has some way to travel. Modern professional athletes possess a direct line – a “bat phone” if you will – to the public consciousness. Now, there are ill-judged tweets (see Cave’s below) and there are important tweets like Simon Zebo highlighting racist abuse as he departed Belfast a week ago.

So when Mr Proactive took to social media, after Ulster’s gutsy win in Leicester, the indoctrinated existence of the rugby player – and in particular these Ulster men – swam to the surface.

“Very proud to be back in the Champions Cup quarter-finals with Ulster! Big thanks to the IRFU for not abolishing the club when @indosport suggested it nine months ago! #suftum”

“Stand up for the Ulster men” indeed. Siege mentally is the bedrock of many a sporting organisation but Cave, in one Sunday morning tweet, decided to revisit the darkest days Ulster rugby will, hopefully, ever know. In April 2018 The Sunday Independent columnist Eamonn Sweeney opened a piece – under the headline “Some Ulster rugby supporters don’t seem to understand the reasons for people’s disgust” - with the question: “Is it time to abolish Ulster?” Cave could do himself and new coach Dan McFarland a favour by re-reading the piece, which he clearly took as literal.

Signs of vibrancy are pouring out of Ulster this season but what Cave and perhaps others need to comprehend is the organisation still has many bridges to mend on and off the field. That this penny has not dropped inside the bubble remains a real world concern.

“He’s a reasonably big player who’s got the bat phone to the referee. He’s the only one allowed to pick up the red phone to talk to the ref so that gives Ireland an advantage. When he talks the referee listens. We’ve got to be good enough to counter that.” Eddie Jones launches his annual verbal volley towards Johnny Sexton.

“Posts” and a nod took the decision out of Peter O’Mahony’s capable hands. There would be no kick to the corner and maul for glory. This was Munster reborn under the steely guidance of the man who has finally filled Ronan O’Gara’s 10 jersey.

Over reliance upon the other man, the one Eddie Jones fears the most, is fading. The bulging Exeter pack bore witness. On closer inspection, Joey Carbery’s performance was shaky at best but, like O’Gara of old, when all else was failing his place-kicking delivered victory.

With 20 goals from 20 strikes since the Castres game even the Kiwis are doubling back to claim their surf baby.

“Long term, I’d love to win a World Cup and be the best player in the world,” Carbery informed the New Zealand Herald.

O’Gara has been comparing him to Beauden Barrett since June 2017 but nowadays the only target is Sexton.

“Best case scenario would be to overtake him not just wait for him to stop,” said the 23-year-old of the 33-year-old. “That’s one of my goals at the moment.”

Nobody wants a repeat of 2011 when Ireland coach Declan Kidney flip flopped from Sexton to O’Gara to the detriment of ground-breaking World Cup progress but an enforced changing of the guard no longer seems so cruel.

From an institutionalised Irish perspective, Saracens usage of their England players against Glasgow made no sense at all. Of course, Mark McCall is not under command to deliver fresh bodies to Pennyhill Park the way Leo Cullen, Johann van Graan, Dan McFarland and Andy Friend must safely funnel prized possessions into the Carton cocoon.

Sarries had banked the home quarter-final with plenty of time to spare yet Maro Itoje, Jamie George, George Kruis and Billy Vunipola were left out there pounding limbs. Meanwhile, Rob Kearney and Sexton get nursed back to health while Jack McGrath is run ahead of Cian Healy in Coventry. Sure, Rory Best and O’Mahony were needed for 80 minutes to see off Leicester and Exeter but, overall, the reason for Irish success and English stumbles is glaring.

Conor Murray was replaced by Alby Mathewson against Exeter with 15 minutes remaining and Munster trailing 6-7. Why? Player welfare.

Tadhg Beirne damaged his knee but the form forward in Irish rugby may be sidelined just as Devin Toner and Iain Henderson return. Still, Beirne would be a serious loss come Six Nations as, like Carbery, he represents the potential for Irish growth since the 2018 Grand Slam.

Gaël Fickou’s switch to wing a nod to what France expect from Ireland 20:39
Europa League round-up: Celtic let two-goal slip away in France as Lille level up 20:15
Barcelona presidential candidate aiming to bring Pep Guardiola back to Nou Camp 20:12
Connacht’s clash against Benetton postponed after Covid-19 outbreak at Italian club 19:36
Pádraig Harrington hot out of the blocks in Bermuda with opening 67 19:47
Crossword Get access to over 6,000 interactive crosswords